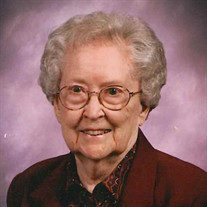 The memorial service for Winona Enge, 101, Valley City, North Dakota will be 10:30 am Saturday, July 11, 2015, at Epworth United Methodist Church, Valley City, with Rev. Dayne Zachrison officiating. Burial will be in Fairview Cemetery, Bismarck, North Dakota. She died Monday, July 6, at the Sheyenne Care Center, Valley City. Visitation will be one hour before the service at the church. Winona Murray was born December 23, 1913 in Louisville, Kentucky, the daughter of Joe and Ethel (Watson) Murray. Her father was killed in 1918 during WWI. She moved with her mother through the Midwest and attended school from the sixth grade through graduation from Grand Forks High School, Grand Forks, North Dakota. She went on and graduated from Jamestown College on June 10, 1936. She was united in marriage to Russell M. Enge on June 12, 1936. She graduated from the National College of Chiropractic, Chicago, Ill, graduating in 1939. They moved to Bismarck, ND, where they raised their family. She was a substitute teacher at Bismarck High School, and taught at Bismarck Junior College and Capitol Commercial College. She was also the office manager of Enge Chiropractic Clinic. After their retirement they made their home in Mesa, Arizona. Russell died on November 15, 1992 and she moved to Valley City to be closer to her son, Brian. Winona was a former member of McCabe United Methodist Church, Bismarck and various teacher organizations. She was currently a member of Epworth United Methodist Church. She was preceded in death by her parents, husband, and two daughters, Carol Fix (1988) and Nancy Lee Enge (age 6) and her sisters, Margaret DeLange and Ethel Stowers. Winona is survived by her son and daughter-in-law, Brian and Karen Enge, Valley City and her daughter and son-in-law, Bonnie and Michael Bougie, Vadnais Heights, Minnesota; seven grandchildren and fourteen great grandchildren. Funeral arrangements for Winona have been entrusted to the care of the Oliver-Nathan Funeral Chapel, Valley City. An online guestbook is available at www.oliver-nathanchapel.com

The family of Winona Enge created this Life Tributes page to make it easy to share your memories.

Send flowers to the Enge family.