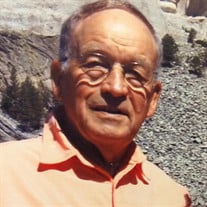 Willis Wagar's funeral service will be viewable at https://vimeo.com/607444159 Willis Wagar, Valley City, ND passed away peacefully Monday, September 13, 2021 at Sanford Health Fargo, ND. The funeral service will be 2:00 pm, Saturday, September 18 at First Baptist Church, Valley City with visitation one hour prior to the service. Burial will be at Memory Gardens, Valley City. Willis Franklin Wagar was born August 31, 1936 at home in rural, Inkster, ND to Raymond and Myrtle (Toppin) Wagar. He graduated from Inkster High School in 1954 as valedictorian. From 1955-1957 Willis was in the service as a civilian officer and served in the Civilian Work Program at the Grafton State Hospital. After the service in July 1957, he moved to Valley City and began selling Watkins products until the fall of 1959. On October 4, 1958 Willis was united in marriage to Mary Jewel Benson in Valley City. In 1959 they moved to a farmstead near Grygla, MN. He contracted with the forest service to cut spruce and poplar and manned the Linder Fire Tower. He also farmed. In March of 1963, the Wagar family moved back to Valley City, and he worked for Benson Nursery. In the fall of 1963, Willis also began working at the boiler plant at VCSU and continued with Benson Nursery. He began college classes in 1965 and graduated in 1971. Willis was then hired at VCSU as the Buildings and Grounds Supervisor until his retirement in 1995. In 1988, Willis and Mary bought Fritch’s Greenhouse and Nursery with their son James and his wife Eydie Wagar which they sold in March 2005. Willis was actively involved in the ministry at the Southwest Bible Chapel in Valley City. He was a member of Kiwanis, Gideon’s International, Toastmaster’s, and a 4-H leader. Willis is survived by his wife, Mary; children: Jacquelyn (Tom) Ueland, Ulen, MN; Joel (Faye) Wagar, Rochester, MN; James (Eydie) Wagar, Valley City; Jennifer (Ewald) Horst, South Range, WI; and Jon (Patty) Wagar, Valley City; 26 grandchildren and 18 great grandchildren. Willis is also survived by his siblings: Donald (Joyce) Wagar, Willmar, MN; Doris Johnson, Omaha, NE; Myrna Ferris, Cedar Rapids, IA; Lois (Greg) Koehn, Lushton, NE; Jeannene Goerke, Valley City; Lee (Holly) Wagar, Owasso, OK; Beverly (Harold) Roeding, Allison, IA. Willis was preceded in death by his parents; step- brother David Evenson; grandson, Christopher Wagar; and brothers in law Robert Johnson, Jim Ferris, and Wayne Vleck. Funeral arrangements have been entrusted to the care of the Oliver-Nathan Funeral Chapel, Valley City. An online guestbook is available at www.oliver-nathanchapel.com

The family of Willis Franklin Wagar created this Life Tributes page to make it easy to share your memories.

Send flowers to the Wagar family.