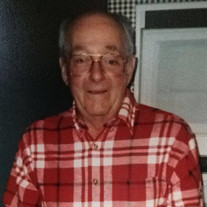 William "Bill" Robert Jones Bill passed away January 1, 2017 after a two year long battle with cancer. Bill was born to John and Katie (Klein) Jones January 7, 1932 in Elliott, ND. He attended school in Elliott until 8th grade and one year at Lisbon High School. Bill got his GED and joined the National Guard in Lisbon. His unit was activated and he was stationed at Camp Rucker in Dothan, Alabama. Bill made the Ranger program where he trained to be a paratrooper. Bill returned to the Lisbon area and shortly after married Marvel Thomason February 18, 1955. They lived in Moorhead, MN for two years before making their home in Glyndon, MN. Bill worked as a bricklayer for many years before starting Jones Masonry. Bill and Marvel had four children together, Marty (Colleen) Jones, Salem, OR, Dennis Jones, Lisbon, ND, Doug Jones, Moorhead, MN and Diane Jones, Dilworth, MN. When Bill and Marvel divorced in 1976, Bill returned to the Lisbon area. He later had two more children, David Iverson, Glyndon, MN and Sean (Robin) Jones, Stirum, ND. Bill loved watching his kids and grandkids play sports throughout the years. He also loved working in his shop. He wasn't happy unless he was busy tinkering on something. Bill is survived by his six children, 16 grandchildren, 26 great-grandchildren, four sisters, Ellen Kline, Edvina Moran, Carolyn Barker and Pearl Wilson, all in the Seattle area. He was proceeded in death by his parents, three brothers, John, Lee and Gary Jones, two sisters, Annabelle Behnke and Ethel Starheim. There will be a memorial service at the North Dakota Veterans Home in Lisbon, ND on Saturday January 14th at 1:00. An online guestbook is available at www.oliver-nathanchapel.com Arrangements are by Oliver-Nathan Funeral Chapel, Valley City, ND

The family of William Robert Jones created this Life Tributes page to make it easy to share your memories.

Send flowers to the Jones family.