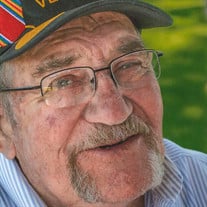 William “Bill” H. Werner, Age 91 of Valley City, ND, passed away Sunday November 19, 2017 at Sheyenne Care Center, Valley City, ND. William “Bill” H. Werner was born June 14, 1926 in McHenry, ND, to Anthon “Tony” and Lila (Bergum) Werner. Bill was the oldest of four children. Bill attended school in McHenry and Glenfield. He completed the Eighth Grade. Then he went to work for his grandparents in Minnesota. He enlisted in the Army where he served in Panama and Italy during World War II (1944 – 1947). After his discharge from the Army, Bill worked as a Blacksmith in Sutton and later in Leal ND. In 1948, he married Velma Boschee at Sutton, ND. They had one daughter Charlene. They lived in Sutton, ND, Leal, ND, and then Minneapolis, MN where he was a machinist for Werner Manufacturing. In 1959 Bill moved their family back to Leal, ND to start farming with Vic Marsh. Velma passed away after a long illness of Multiple Sclerosis. Bill married Angeline “Angie” Bender Steckler at Wimbeldon, in 1972. He loved to work. In addition to farming, he had a haystack moving business and was a dozer operator (cat skinner). Bill was the happiest when he could help out a neighbor. His welding skills and ability to fix anything kept his machinery and his neighbor’s machinery running smoothly. Bill’s love of learning kept him current with each generation’s technology. He could do everything from welding back in the 50’s to texting his grandchildren in 2017. He loved a challenge. He was a lifetime hobbyist. His hobbies included: metalworking, carving, woodworking, stained glass, restoring old cars, riding his Harley, technology, and catching walleye on Marion Lake. He loved to sing, he was a member of various church choirs. He was also a member of the Elks, Eagles, VFW, Legion, D.A.V., and the Knights of Columbus. Bill is survived by his wife, Angie; a daughter Charlene (Rodney) Rondestvedt, Lisbon, ND; eight step children, John (Julie) Steckler, Missoula, Montana, Tom (Karon) Steckler, Jamestown, ND, Jan (Gerry) Rubink, Columbia, SC, Diana (Stewart) Miller, Colorado Springs, CO, Jerry (Deb) Steckler, Spiritwood Lake, ND, Angela (Clinton) Hoggarth, LaMoure, ND, Ed (Jenny) Steckler, Minot, ND, Vicky (Michael) Buckley, Alto, NM; 29 grand children, 46 great-grand children; several nieces and nephews; and many beloved neighbors and friends. Preceding him in death was his wife, Velma. His parents, a brother, Al, two sisters, Alma and Esther and a step daughter-in -law Jeanine (Lampert) Steckler. “A life well lived.” The funeral mass will be Friday, November 24, 2017 at St. Catherine’s Catholic Church, Valley City. Visitation will be Thursday 6 to 7 pm at the church with a prayer service at 7 pm. Visitation will continue one hour before the service at the church. Burial will be in Memory Gardens, Valley City. Funeral arrangements have been entrusted to the Oliver-Nathan Funeral Chapel, Valley City. An online guestbook is available at www.oliver-nathanchapel.com.

The family of William "Bill" Henry Werner created this Life Tributes page to make it easy to share your memories.

Send flowers to the Werner family.