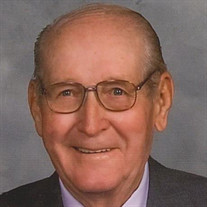 Willard was the only child born to Peder and Ida Marie (Jacobsen) Lee on January 31, 1927 in the farm home on the land homesteaded by this grandfather, Christian Lee, in 1880, near Nome, ND. He attended Eastedge school for his first ten years, graduating from Nome High School in 1944 where basketball was his favorite activity. He farmed with his father and uncle Jacob Jacobsen. He passed away peacefully in his sleep during an afternoon nap on May 8, 2018 at Maryhill Manor, in Enderlin, ND where he lived for the last weeks of his life. In the winter of 1946, Willard spent ten weeks studying at the Lutheran Bible Institute in Minneapolis. He went there for a number of reasons one of which was to further a friendship with Lorene a young woman he met the previous summer on a bus returning from Mt. Carmel Bible Camp. Willard and Lorene Gunderson, from Lakota ND were married on June 16, 1948 and lived on a farm near Nome. Their union was blessed with three children, Kathlynn, Deborah, and Peter. Willard served his churches and communities by holding offices on numerous boards and committees. He was active in the Enderlin Lions Club and was named a Melvin Jones Fellow. After a back injury that limited farm work, the family moved to Austin, Minnesota for 4 years where Willard learned to sell insurance with the Lutheran Brotherhood company. In 1968 they moved back to Nome and he resumed a combined career of farming and selling insurance (and coffee drinking). He continued these activities until retirement, also selling insurance for State Farm and Citizens Bank. Willard is survived by Lorene, his wife of 69 yrs, 3 children, 11 grandchildren, and 12 great grandchildren. Children include; Kathlynn (David) Johnson, their children Carter (Jody); Travis (Cecile) and son Adrien; Luke (Tu-Anh) and son Parker; Deborah (Pat) Pierce, their children Trina (Mark) Groen and girls Emily and Katie; Sara (Michael) Ting and sons Zachary and Aiden; and Ryan Pierce; Peter (Debra) Lee, their children Christopher (Rachelle) and children Griffin, Claire and Lincoln, Jason (Jenna) and children Elin and Blaise, Nicholas (Chelsey) and daughter Landry, Matthew (Lindsey) and Elena. Willard loved the gifts the Lord gave him including his family, the land, the strength to work hard, opportunities for growth and change, and the connections he made with people in every place he lived or traveled. One of his last clear statements from his bed was, “Be Kind”. Memorials preferred to Enderlin HEART program and Gideon’s international The funeral service will be 10:30 am Saturday, May 12, 2018 at Waldheim Lutheran Church, Kathryn, North Dakota. Burial will be in the Waldheim Cemetery. Visitation will be Friday 5:30 to 7:00 pm at Trinity Lutheran Church, Enderlin, with a prayer service and hymn sing at 7 pm. Visitation will continue one hour before the service at Waldheim. Funeral arrangements have been entrusted to the Oliver-Nathan Funeral Chapel, Valley City, ND. An online guestbook is available at www.oliver-nathanchapel.com

Willard was the only child born to Peder and Ida Marie (Jacobsen) Lee on January 31, 1927 in the farm home on the land homesteaded by this grandfather, Christian Lee, in 1880, near Nome, ND. He attended Eastedge school for his first ten years,... View Obituary & Service Information

The family of Willard Irving Lee created this Life Tributes page to make it easy to share your memories.

Willard was the only child born to Peder and Ida Marie (Jacobsen)...

Send flowers to the Lee family.