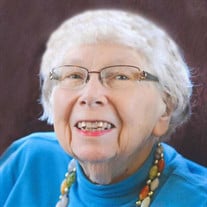 Wanda Mae Newkirk, age 91, passed away peacefully with loved ones present on April 18, 2016 at Sheyenne Care Center under hospice care. Wanda was born January 17, 1925, in the Northland Township of Ransom County in North Dakota. She was the fourth of six children who blessed the marriage of Oscar and Lorina (Johanneson) Anderson. Wanda was baptized and confirmed in the Lutheran faith, which was always an important part of her life. She married Ross Newkirk in 1962, in Carmel, California. Wanda’s first schooling was at the country school near their home and later the Kathryn Public School from which she graduated. During her high school years she participated in various activities, went camping with friends, took weekly piano lessons in Valley City and music appreciation courses by correspondence. Anyone coming near their home could hear her practicing the piano vigorously! Wanda was valedictorian of her high school graduating class and for that honor was awarded a scholarship for four years of tuition to the University of Jamestown. Due to shortage of teachers during the war years, she interrupted her education for one year to teach grades five to eight in Kathryn. She received her BA degree from the University of Jamestown majoring in English and music. Her teaching career included Hebron, ND, Wheelock, ND and several years in Harvey, ND. Wanda moved to California and worked as a secretary in a movie studio in Los Angeles. However, she found that work less than challenging and returned to teaching. She taught in McFarland High School, Bakersfield High School and after her marriage, taught in Morro Bay High School. Wanda enjoyed learning. While teaching in California, she continued her studies and received a Master’s Degree in 1968 from San Jose State College and a Master’s Degree from Cal Poly in 1972. Upon her retirement from teaching, she worked for a private accountant in Morro Bay. Ross passed away in 1985. She later moved to Valley City, ND, to be near her family, especially her mother, who then lived at the Sheyenne Care Center. During her retirement, travel became important to Wanda and she made trips around the US and to a number of overseas countries including Norway, The Holy Land, and Germany. Never one to sit idly, she spent many hours sewing and her nieces and nephews were the recipients of pajamas at Christmas time, and new babies in the family received quilts. In addition, she was always knitting mittens for many family members. Wanda became an active member of Our Savior’s Lutheran Church in Valley City, ND Retired Teachers’ Oganization, and was the accountant for the condo where she resided. Wanda is survived by her brother Duane (Lois) Anderson of Winterhaven, Florida, and her sister, Hazel Anderson of Grandview, MB, her step-daughter Jean, a granddaughter, Patricia and a great-grand daughter, Anna, as well as numerous nieces, nephews and other extended family. She was preceded in death by her husband, Ross Newkirk, her parents, two sisters, Arlene Larson and Eunice Arves; and a brother, Orris Anderson. Funeral service for Wanda will be held on Saturday, April 23rd at 10:30 AM at St. Paul’s Lutheran Church in Kathryn with Pastor Bradley Edin officiating. There will be visitation one hour prior to the service. Interment will be at the St. Paul’s Cemetery following the service.

Wanda Mae Newkirk, age 91, passed away peacefully with loved ones present on April 18, 2016 at Sheyenne Care Center under hospice care. Wanda was born January 17, 1925, in the Northland Township of Ransom County in North Dakota. She was the... View Obituary & Service Information

The family of Wanda Mae Newkirk created this Life Tributes page to make it easy to share your memories.

Send flowers to the Newkirk family.