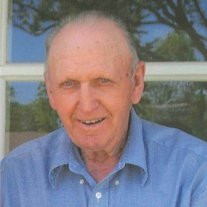 The funeral service for Walter “Wally” Raymond Kuder, 90, a lifetime resident of Ashtabula Township, Rogers, North Dakota will be 2 pm Wednesday, March 27, 2013 at Epworth United Methodist Church, Valley City, North Dakota with Pastor Dayne Zachrison officiating. Burial will be later in the spring in Memory Gardens, Valley City. Visitation will be 5 to 7 pm Tuesday at the Oliver-Nathan Funeral Chapel and one hour before the service at the church. Walter Raymond Kuder was born June 28, 1922 on the family homestead in Ashtabula Township near Rogers, North Dakota, the son of Raymond and Hilda (Ronzheimer) Kuder. He attended Logan country school District 17 at Rogers and graduated from College High, Valley City, in 1940. He began farming with his father after graduating. Wally was united in marriage to Alma Radke on April 7, 1948 in Valley City. They made their home on the farm his grandparents Fred and Della Kuder homesteaded. They farmed and were stewards of the land for over 60 years. He planted and hoed many trees over the years and he always made sure that the farm always had a dog on it. Wally enjoyed running the combine especially after air conditioned cabs came to be. He was a member of the ND Stockman’s Association for 56 years and had served on several community boards throughout his lifetime. Wally was a faithful supporter of the ND Winter Show, attending over 70 years of shows. In his younger years, he enjoyed deer hunting with his neighbor Willard Olson. He also bird hunted and he liked to go fishing. He later took and taught his grandchildren how to fish. Wally enjoyed his only two grandchildren and was pleased that they also have a love for the farm and its lifestyle. He was a member of Epworth Methodist Church and a member of the Eagles. Wally and Alma frequented the Elks, KP and Eagles Clubs for Saturday night dances as they loved to dance. Wally died Saturday, March 23, at Mercy Hospital, Valley City and will be greatly missed by his family. He is survived by his wife of 64 years, Alma; two sons, Terry and Kyp, both of Rogers; two daughters, JoNelle Kuder, Fargo, ND and Renee (Kevin) Christ, Bismarck, ND; two grandchildren, Nick (Amy) Christ, Bismarck and Bridget Christ, Rochester, Minnesota; a sister, Dorothy Rose, Whittier, California; one brother Gordon (Evelyn) Kuder, Renton, Washington; several nieces and one nephew. He was preceded in death by his parents and one brother, Wesley Kuder. Funeral arrangements have been entrusted to the Oliver-Nathan Funeral Chapel, Valley City. An online guestbook for Wally is available at www.oliver-nathanchapel.com

The family of Walter "Wally" Raymond Kuder created this Life Tributes page to make it easy to share your memories.

The funeral service for Walter “Wally” Raymond Kuder, 90, a lifetime...

Send flowers to the Kuder family.