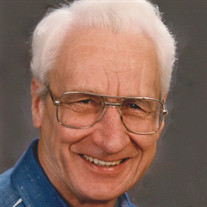 Walter George Webber was born June 17, 1925 in Cooperstown, ND to F. Joseph and Ellen (Dolan) Webber. He attended several rural Barnes County schools and worked on various farms until joining the Navy. Upon returning home from active duty he farmed with his father. He was united in marriage to Cecelia Burkhart July 31, 1947 in Hope, ND. They made their home in the Luverne area where Walter farmed and worked at Occident Mill in Valley City from 1955-1962. In 1963, he was transferred to Superior, Wisconsin continuing to work with Occident Mill until 1989 when he retired and moved Barron, Wisconsin. Walter enjoyed hunting, fishing, and riding motorcycle. He also appreciated the time spent with his family traveling, snowmobiling, and attending rodeos. Cecelia passed away in 2002 and in 2009 Walter moved to Valley City. Walter took great pride in helping others and in later years was very grateful for the help and care he received from others especially the staff at Bridgeview and Hospice of the Red River Valley. He is survived by his children: Linda (Robert) Fus, Sibley, ND., Kathleen (Steven) Fagerlin, Barron, WI, and Justin (Elaine) Webber, Lakeville, MN; close friend, Alice Wendel, Valley City; his grandchildren: Steve (Tracie) Fus, Carl (Kim) Fus, Brent Fagerlin, Lori Bygd, Jessica Webber, Andrew Tuma, and Michael Tuma; and ten great grandchildren. He was preceded in death by his parents, sisters: Florence June Pickar, Gladys Bjornson, Rosalind Jacobsen, and brother Charles Webber. The funeral service for Walter G. Webber, 93, Valley City, North Dakota will be 2 pm Friday, September 7, 2018 at the Oliver-Nathan Funeral Chapel, Valley City. Visitation will be 2 hours before the service in the chapel. Burial will be in the Sunnyside Cemetery, rural Dazey, North Dakota. He passed away August 30, 2018 in Valley City, ND. Funeral arrangements have been entrusted to the care of the Oliver-Nathan Funeral Chapel. An online guestbook is available at www.oliver-nathanchapel.com

The family of Walter Webber created this Life Tributes page to make it easy to share your memories.

Send flowers to the Webber family.