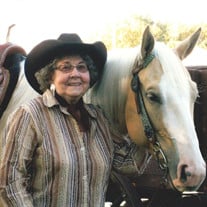 The funeral service for Vivian M. Pabst, 95, Sanborn, North Dakota will be 2 pm Saturday, February 29, 2020 at Our Savior’s Lutheran Church, Sanborn. Visitation will be 4 pm to 6 pm Friday at Oliver-Nathan Funeral Chapel, Valley City and will continue one hour before the service at the church. Burial will be in the spring in Fairview Cemetery, Sanborn. She died Wednesday, February 26, at Essentia Health Fargo. Vivian Marcella Broadwell, the daughter of Bert and Caroline (Bommer) Broadwell was born May 10, 1924 near Sanborn. She attended grade school in Sanborn and then attended Valley City Public School. Vivian worked on the family farm until moving to Los Angeles and started working for Douglas Aircraft. She was united in marriage to George F. Pabst, Sr. on March 10, 1944 in Los Angeles. They continued to make their home and George was drafted into the US Army in July of 1944. After his discharge they moved to Sanborn in 1948, where they began farming. Their great grandson, Bradley Berg, grew up and helped them on the farm. They retired in 2002. George passed away January 20, 2009 and Vivian continued living on the farm until she passed away. She liked gardening and was very much part of the farming operation. Vivian enjoyed horse shows, trading horses and taming wild broncos. She loved reading and was very in tune with politics and the happenings around the world. Vivian is survived by her son, George (Wanda) Pabst, Jr., Sanborn; two daughters, Barbara (Freddie) Berg, Valley City and Beverly Jacobson, Sanborn; and seven grandchildren, James (Athena) Jacobson, Jody Jacobson, Janie (Don) Gore, Tami Berg, Teri (Gary) Crooks, Jesse (Jodi) Pabst, and Leslie (Merle) Zachrison; seven great grandchildren and one great-great granddaughter. She is also survived by one brother, Keith (Mary) Broadwell, Fargo. She was preceded in death by her parents, husband, one brother and three sisters, and a son-in-law, LeRoy Jacobson. Funeral arrangements have been entrusted to the care of Oliver-Nathan Funeral Chapel. An online guestbook is available at www.oliver-nathanchapel.com

The family of Vivian Marcella Pabst created this Life Tributes page to make it easy to share your memories.

Send flowers to the Pabst family.