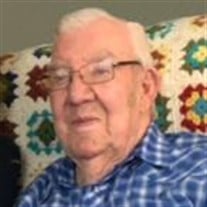 The funeral service for Virgil H. Wolfgram, 88, Wahpeton, North Dakota formerly Valley City, North Dakota will be 11 am Friday, October 12, 2018 at Epworth United Methodist Church, Valley City, ND. Visitation will be Thursday, October 11, 2018 from 5:30 pm to 7 pm with a prayer service at 7 pm at the church. Visitation will continue one hour before the service at the church. Burial will be in Memory Gardens, rural Valley City. Virgil Harry Wolfgram died peacefully on October 8th, at St. Benedictine Living Community of Wahpeton, ND. Virgil was born on February 2nd, 1930 in Richey, Montana to Harry and Myrtle Wolfgram. His family moved to Shields, ND when he was one and then to Hamilton, ND when he was eight years old. Virgil was one of seven children. He graduated from Hamilton High School in 1948. Virgil then went to work for the State Highway Department as a part of the survey crew. At the age of 22, he joined the Army. He trained at Camp Roberts in California and served in the Korean War where he was a gunner on a 4.2 inch mortar. He also guarded war prisoners and was a barber. After the war, he moved back to Hamilton and continued his work with the Highway Department. On August 4, 1953 he married MyrnaUtecht. While working for the State Highway Department they lived in several cities throughout North Dakota. In 1963 they settled in Valley City where they made their home and raised two children, Bonnie and Bryan. In 1967, Virgil began working for the Barnes County Highway Department. In 1975, Virgilreturned to work for the State Highway Department as a construction coordinator and went back to school at Bismarck Junior College for engineering and drafting for one year. He retired from the State Highway Department in 1992 but continued to work for the next several summers as a supervisor for Interstate Engineering. Virgil was a proud member of the Eagles and VFW. He was a two time Commander of VFW Post 2764, a leader for Voice of Democracy, served in the VFW Color Guard and Order of the Cooties. He thoroughly enjoyed serving at the “Cootie steak fry” where he was well known for his pickled onions. Family was extremely important to Virgil and heloved spending time with them. In his free time he also enjoyed gardening, canning, cooking, baking, hunting, fishing, and wood working. He spent countless hours affectionately making many craft items forEpworth United Methodist Church in Valley City and Evergreen United Methodist Church in Wahpeton. In 2004, he moved to Wahpeton, ND to be closer to his son and family and he adopted his best dog friend Scrappy. In 2015, he moved to Twin Town Villa Assisted Living in Breckenridge, MN until his recent move to St. Benedictine Living Community of Wahpeton. He is preceded in death by his wife, parents, one brother and two sisters. Virgil is survived by his daughter Bonnie (Karl) Vangerud of Fargo, ND and son Bryan (Mary) Wolfgram of Wahpeton, ND; his grandchildren Eric (Alicia) Wolfgram, Matthew (Megan) Vangerud, Haley (Brandon) Fisher, Claire (Conrad) Kranz, Meaghan Wolfgram, Dylan Wolfgram, and Brody Wolfgram; his great-grandchildren Vera Fisher, Charlotte Kranz, and Clark Vangerud. He also is survived by three sisters Eva Nelson, Shirley Lawonn, and Darlene Henschel along with several nieces and nephews. Funeral arrangements have been entrusted to the care of the Oliver-Nathan Funeral Chapel, Valley City. An online guestbook is available at www.oliver-nathanchapel.com

The family of Virgil Harry Wolfgram created this Life Tributes page to make it easy to share your memories.

Send flowers to the Wolfgram family.