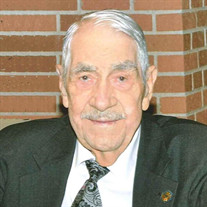 Vernon's service is viewable at https://vimeo.com/657904692 Vernon L. Huseby, 101, of Valley City, North Dakota, formerly of Nome, North Dakota and Enderlin, North Dakota passed away Thursday, December 16, 2021 at SMP Health – St. Raphael, Valley City. Vernon LeRoy Huseby was born May, 5, 1920 to Ole and Elenora (Elofson) Huseby in Preston Township, Ransom County, North Dakota. Vernon was a lifelong member of St. Petri Lutheran Church Nome, North Dakota where he was confirmed and baptized. Vernon attended Preston Township School. He then entered the Civilian Conservation Corp for three years where he served in Turtle River State Park, Larimore, North Dakota and also serving in Cass County, North Dakota. Vernon then entered into the US Air Force where he was in administrative school and worked at a desk which he was grateful for not being in combat. After returning home he began farming with his brother as their father had passed away. Vernon was united in marriage to Helen Severson on July 12, 1975 in Fargo, North Dakota. They lived on the family farm until moving to Enderlin, North Dakota in 2000. They later moved to a condo at Edgewood Vista, Fargo North Dakota for five years. In April of 2015, Vernon and Helen became residents of Bridgeview Estates, Valley City, North Dakota. Vernon only recently moved to the SMP Health – St. Raphael at 101 years old. Vernon was an avid reader and a Civil War buff. He enjoyed gardening, writing, carpentry, visiting and family was always first of course. Vernon is survived by his wife and a number of nieces and nephews. Vernon was preceded in death by his parents, six brothers, three sisters, three sisters-in-law and four brothers-in-law. Visitation will be 5:00 pm to 7:00 pm, Tuesday, December 21 at Oliver-Nathan Funeral Chapel, Valley City. The funeral service will be 2:00 pm, Wednesday, December 22 at St. Petri Lutheran Church, Nome. Burial will be in St. Petri Cemetery, Nome. Funeral arrangements have been entrusted to the care of Oliver-Nathan Funeral Chapel, Valley City. An online guestbook is available at olivernathanchapel.com

The family of Vernon L. Huseby created this Life Tributes page to make it easy to share your memories.

Send flowers to the Huseby family.