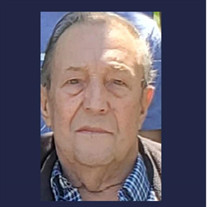 Valentine “Tiny” Fercho, 86, Fargo formerly of Sibley, ND passed away Saturday, May 8, 2021 in Fargo. Tiny was born June 19, 1934 in rural Napoleon, ND to Edward and Maggie (Schumacher) Fercho. Tiny farmed with his father on a farmstead north of Edgeley, ND until the age of 18. He enlisted in the US Navy in 1953 and served during the Korean Conflict. He received an honorable discharge from the Navy in 1957. In 1956, he married Faye Gehlert in Jamestown, ND. Together they had three children. Tiny worked as a heavy equipment operator living in various cities before settling in Edgeley. The family moved to Tower City in 1973 where they purchased a bar and “Tiny’s Tavern” was born. He retired from the bar in the early 1980’s. He married Carol Finneseth in 1983 and lived in West Fargo, ND. Tiny spent his last years in Sibley. There he was able to enjoy fishing, gardening and cooking. He also enjoyed spending time with numerous friends there that became like family to him and watched over him in his later years. He was preceded in death by his parents, brothers Willie and Leo Fercho, a sister Marion Veil and an infant grandson Tyler Max Gainsforth. Tiny is survived by his three children, Doug (Theresa) Fercho, Bismarck, ND, Valerie (Jeff) Gainsforth, Jamestown, ND, and Teri (Larry) Lisburg, West Fargo, ND; seven grandchildren and eleven great grandchildren. Also surviving him are his brothers, Roger Fercho, Valley City, Duane (Deb) Fercho, Watertown, SD, Donny Fercho, Grafton, ND; and a sister Angie Brown, Sun City West, AZ. A funeral mass will be held 11 am Wednesday, May 12 at St. Mary’s Catholic Church, rural Dazey, ND. Visitation will be 5-7 pm Tuesday at Oliver-Nathan Funeral Chapel, Valley City, ND with a prayer vigil at 7 pm. Burial will be in Fargo National Cemetery, Harwood, ND. Memorials may be directed to St. Mary’s Cemetery Fund or AmVets Post 3, 345 -12th Ave NE, Valley City, ND 58072. Funeral arrangements have been entrusted to the care of the Oliver-Nathan Funeral Chapel. An online guestbook is available at www.oliver-nathanchapel.com

The family of Valentine "Tiny" Fercho created this Life Tributes page to make it easy to share your memories.

Send flowers to the Fercho family.