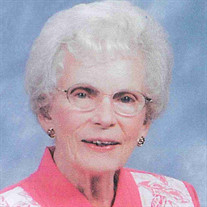 Vae (Nelson) Kruschwitz, 100, passed away peacefully on September 25, 2014 at Eventide in Moorhead, MN. She was born to Wilfred and Grace (Chilberg) Nelson on July 23, 1914 on a farm near Sykeston, ND. In 1932, she graduated as class valedictorian from Sykeston High School. Vae received her standard teaching degree from Valley City Normal School (now VCSU) in 1934. She taught in Sykeston, Pettibone, and Dickey, ND before her marriage to Earl H. Kruschwitz on November 14, 1937. Later she taught for 25 years in Sanborn, ND. Earl and Vae were married for 55 years. They raised their four daughters in Valley City, ND where they lived for most of their married life. He died on February 24, 1993. She continued living in Valley City and was active at Epworth United Methodist Church, serving as Sunday School Superintendant for several years following her retirement from teaching in 1977. She was a member of Delta Kappa Gamma and the Retired Teachers Association and volunteered at the Barnes County Historical Society. She moved to Moorhead in 2005. She was a good cook and enjoyed decorating birthday cakes; enjoyed traveling; and was an avid bridge player. Vae touched many people in her 100 years and had a gift of making each one of them feel valued and special. She is survived by her sister, Donna Nix; daughters, Mary Schroeder and Deborah (Steve List) Kruschwitz-List; sons-in-law, John Ostlie and Lee Pawluk; grandchildren, René (Marty) Fisher, Phil (Brenda) Ostlie, Kimberly (Robert Gilbertson) Pawluk-Gilbertson, Heidi (Mac) Bain, Derek (Madeline) Legler, Tiffany (Sean Lipham) Pawluk, and Stephanie List; and 11 great grandchildren. Several nieces and nephews also survive. She was preceded in death by her husband; daughters, Joan Ostlie and Beth Pawluk; brother, David Nelson; sister, Gloria Hewitt; and an infant sister, Verle. The funeral service for Vae will be held at 2:00 PM, Saturday, September 27, 2014 at Epworth United Methodist Church, Valley City. Burial will be in Memory Gardens, Valley City. Visitation will be held the hour prior to the service at the church on Saturday. In lieu of flowers, the family suggests memorials be made to Epworth United Methodist Church or Valley City State University Foundation. The family wishes to thank the wonderful staff at Eventide who took loving care of Vae during the last four years of her life and always enjoyed her beautiful smile. Oliver-Nathan Funeral Chapel has been entrusted with assisting the family with arrangements. An online video tribute and guestbook are available at www.oliver-nathanchapel.com

Vae (Nelson) Kruschwitz, 100, passed away peacefully on September 25, 2014 at Eventide in Moorhead, MN. She was born to Wilfred and Grace (Chilberg) Nelson on July 23, 1914 on a farm near Sykeston, ND. In 1932, she graduated as class valedictorian... View Obituary & Service Information

The family of Vae Kruschwitz created this Life Tributes page to make it easy to share your memories.

Send flowers to the Kruschwitz family.