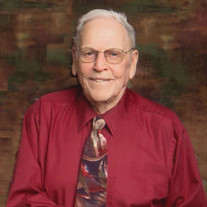 Torrey Berge was born on June 29, 1922 on a farm near Cooperstown, North Dakota to Albert and Betsy Berge. He was the second of five children. He grew up on the family farm in Sverdrup Township near the Sheyenne River, surrounded by many aunts, uncles, cousins, and his maternal grandparents. Torrey shared many great stories of growing up with his big, extended family. Torrey began farming at a young age. As the oldest boy in the family, he dropped out of high school to help his father with the farming. During World War II, Torrey joined the army. He was stationed in Japan after Japan surrendered. He shared stories of living in Japan and having the job of driving around senior army officers. During his time in the army, Torrey was able to earn his GED. When returning to the States, Torrey took advantage of the GI Bill and graduated with a teaching degree from Concordia College, Moorhead, MN in 1956. He was always very proud of being a Cobber! He taught for a year in Warwick, North Dakota. He then received an offer from an acquaintance who was living in Ketchikan, Alaska, to come and teach in Alaska in 1957 (before Alaska was a state!). Torrey accepted the offer and drove to Ketchikan. During his first year of teaching there, he met Janet Zoll who had arrived in Alaska via Ohio. They were married the summer of 1958 in Ohio. They began another teaching year the Fall of 1958, but as spring work began in 1959, Torrey’s father became ill. Torrey left Ketchikan to go back to the family farm to help with the farm work. Janet joined him after the school year ended. Torrey’s father died in August of 1959. Torrey decided he would rather be a farmer than a teacher, so he and Janet settled near Hannaford, North Dakota. He farmed until 1992. After the death of his wife in 1993, Torrey moved to Valley City, North Dakota to be near his daughter, Gail (Miller). Torrey was involved in activities and the support of his home church, Zion Lutheran Church, Cooperstown. He was still a member of the American Legion. After his retirement and his move to Valley City, he volunteered to help people in many ways, including driving people to doctor’s appointments. Torrey enjoyed traveling, meeting people and spending time with family and friends. Torrey has spent the last five years at Bridgeview Assisted Living in Valley City. He very much enjoyed his time there, making new friends with both residents and staff. Torrey leaves to mourn and cherish his memory his three daughters, Louanna Myles (Mickey), Gail Miller (Jeffrey), and Betsy Kolden (Gary); 10 grandchildren; and 8 great-grandchildren. He is also survived by his youngest sister Ellen Perkins (Fred); his sister-in-law, Jinny Ann (Richard); along with a number of nieces, nephews and cousins. He is predeceased by his wife, Janet; sister, Lue, and her husband, Melvin; brother, Robert, and his wife, Adeline; and brother, Ronald, and his wife, Ruth. He will be greatly missed. Visitation will be 5:00 pm - 7:00 pm, Sunday, August 23, 2020 at the Oliver-Nathan Funeral Chapel, Valley City, with a prayer service beginning at 7:00 pm. The funeral service will be 11:00 am, Monday, August 24 at Saron Church, Cooperstown, ND with visitation one hour prior to the service. Interment will be in Westley Cemetery, Cooperstown, ND. Funeral arrangements have been entrusted to the care of the Oliver-Nathan Funeral Chapel, Valley City. An online guestbook is available at www.oliver-nathanchapel.com

Torrey Berge was born on June 29, 1922 on a farm near Cooperstown, North Dakota to Albert and Betsy Berge. He was the second of five children. He grew up on the family farm in Sverdrup Township near the Sheyenne River, surrounded by many aunts,... View Obituary & Service Information

The family of Torrey Berge created this Life Tributes page to make it easy to share your memories.

Send flowers to the Berge family.