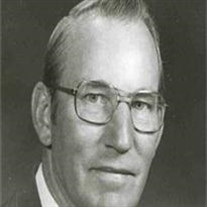 Theron L. Strinden was born on May 26, 1919 in Litchville, ND, the son of Teddie and Martha (Eidsvig) Strinden. He attended Litchville Public School. Following graduation, he went on to North Dakota Agricultural College and North Dakota State School of Science. In July of 1941, he entered the United States Army. He is a veteran of the attack on Pearl Harbor. Theron was honorably discharged in September of 1945. When he returned home, he joined the family hardware, automobile, and implement business. On August 20, 1944, he married Mavis Nordgaard. They made their home in Litchville, where they lived their entire married life. He was a life member of First Lutheran Church in Litchville. He served as a City Council Member for 25 years. He was a North Dakota State Senator for 16 years. Theron is a Past President of the Litchville State Bank and the North Dakota Implement Dealers Association. He was a member of many civic and service organizations. Theron is survived by his wife, Mavis; children Marna (Suresh) Ramnath of Toledo, Ohio and Steve (Cheryl) Strinden of Fargo, ND; grandchildren, Maia, Monika, Marie, and Michael; and brothers, Alfred (Cleone) of Grand Forks, ND, Dean (Cathleen) of Williston, ND, Earl (Janice) of Grand Forks, and David (Ella) of Leeds, ND. He was preceded in death by his parents; a brother, Keith; and sisters, Ione and Marcelle. His family and the Litchville community were Theron’s loves and passions. Theron passed away in Fargo, ND on March 3, 2011 at the age of 91.

The family of Theron Strinden created this Life Tributes page to make it easy to share your memories.

Send flowers to the Strinden family.