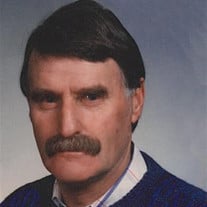 The funeral service for Theodore Noot, 87, Marion, North Dakota will be 10:30 am Saturday, August 18, 2018 at North Marion Reformed Church, rural Marion. Visitation will be one hour before the service at the church. Burial be at the North Marion Cemetery. He died Sunday, August 12, at Sanford Hospital, Fargo. Theodore was born September 10, 1930 the son of Theodorus and Trijntje Noot. He was raised on a farm his parents purchased in 1931 in Greenland Township. He attended Greenland school, just south of the farm, through the 8th grade. After he finished school, Ted worked on the family farm with his father and brother. On September 9, 1954 Ted entered the United States Army serving until July 25, 1956. Upon his discharge he returned to the Marion area and began farming. He was united in marriage to Delores Withnell on November 2, 1978. They continued farming until retiring in 2005. His hobbies included gardening, reading and doing metal work in his shop. Ted always made time to study and read the Bible. He was a member of the North Marion Reformed Church. Ted is survived by his wife, Delores; step-children, Gary (Lois) Withnell, Fargo, Carmen (Robert) Neevel, Marion, and James (Naomi) Withnell, Fargo, Vickie Hartley, Lonsdale, MN; nine grandchildren and 17 great grandchildren; a sister, Elizabeth Berge, Valley City; and several nieces and nephews and their families. He was preceded in death by his parents, one sister, Anne Letcher and one brother, William “Willey” Noot. Funeral arrangements have been entrusted to the care of the Oliver-Nathan Funeral Chapel, Valley City, North Dakota. An online guestbook is available at www.oliver-nathanchapel.com

The funeral service for Theodore Noot, 87, Marion, North Dakota will be 10:30 am Saturday, August 18, 2018 at North Marion Reformed Church, rural Marion. Visitation will be one hour before the service at the church. Burial be at the North... View Obituary & Service Information

The family of Theodore "Ted" Noot created this Life Tributes page to make it easy to share your memories.

Send flowers to the Noot family.