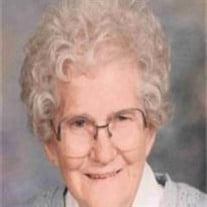 Thelma Agnes Welken was born September 12, 1918, at her parents’ home in Skandia Township in Barnes County, ND to Iver and Olga (Larson) Welken. At the age of 12, the family moved to Meadow Lake Township to another farm. She graduated from high school at Green School and attended Valley City State Teachers College. She taught in one-room schools in Skandia Township and Median, ND. On September 21, 1940, Thelma married Bernard Benson. They lived on the family farm in Svea Township and raised their four children. In 1964, they moved to Valley City. In the late 1980’s they purchased a home in Arizona and spent their winters there. They lived in St. Paul, MN from 1992-1996. After Bernard died in 1996, Thelma moved to Bismarck. Thelma was a very creative lady. She loved art, music, and especially liked to write poetry. She always enjoyed visiting with friends and had a kind word for everyone. Most of all she loved her family and treasured the times she spent with her children and grandchildren. Her Norwegian heritage was very important to her and she shared many stories and traditions with her family. She was proud that her name came from a book her father had read about a Norwegian princess named Thelma. She died February 22, 2012 at Missouri Slope Lutheran Care Center in Bismarck, ND. She is survived by her daughter, Delores Erickson of Maple Grove, MN, son, Ralph (Kathy) Benson of Jamestown, ND, daughter, Donna (Jon) Nestoss of Bismarck; 9 grandchildren, Russell (Holly) Benson of St. Cloud, MN, Richard (Stacy) Benson of Horace, ND, Angela (Kevin) Budke of Little Falls, MN, Brenda (Robert) Flueth of Shoreview, MN, Melissa (Lance) Brown of Joplin, MO, Kristen (Josh) Lynn of Minneapolis, MN, Kaari Erickson of Columbia Heights, MN, Erik (Sarah) Nestoss of San Diego, CA, and Peter Nestoss of Gwinner, ND; 13 great grandchildren; and 8 step-grandchildren. She was preceded in death by her parents; husband; son, Ronald Benson; grandson, Patrick Benson; and brothers, Leonard and Elias Welken.

Thelma Agnes Welken was born September 12, 1918, at her parents’ home in Skandia Township in Barnes County, ND to Iver and Olga (Larson) Welken. At the age of 12, the family moved to Meadow Lake Township to another farm. She graduated from... View Obituary & Service Information

The family of Thelma Benson created this Life Tributes page to make it easy to share your memories.

Send flowers to the Benson family.