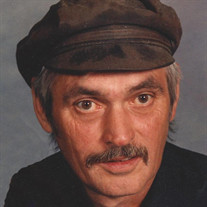 The graveside memorial service for Terry Pollock, 73, Valley City, North Dakota will be 2 pm Friday, October 1, 2021 at Memory Gardens, near Valley City. He passed away Wednesday, September 22 at his home with his wife by his side under the care of CHI Health at Home and Hospice, Valley City. Terrence “Terry” Howard Pollock was born in Fargo, North Dakota, the son of Nicholas and Shirley (Kingsley) Pollock. He grew up on a farm near Wheatland, North Dakota until the age of seven, when the family moved to a farm south of Valley City. Terry graduated from Valley City High School in 1966. He worked for Miller Motors as a mechanic for one year before attending Bismarck Junior College, Bismarck, North Dakota where he attained his degree in Auto Body Repair, “Man Power”. Terry moved back home where he farmed, raised cattle and did automotive repair. He was united in marriage to Sandi Eman on February 10, 1968 in Valley City. They raised two children, Patrick and Linda. Terry was partners, with his wife, owning Unique Antiques for 25 years. One of Terry’s final requests was riding in his Chevelle which he was able to do on Sunday, September 17 with the help of CHI Hospice and their excellent care providing “The Last Ride”. A memory his loved ones will always cherish. Terry could fix anything and enjoyed restoring radios and antique toys. He also enjoyed music. His daughter’s fondest memories were dancing and singing with her dad. He was preceded in death by his son Patrick; a grandson Ryan Hendricks; and his parents. Terry is survived by his wife of 53 years, Sandi; his daughter, Linda Pollock, Murfreesboro, Tennessee; three grandsons, Garret Hendricks, Hunter Hendricks and Rylee Hendricks; a half sister Tracie Stokka, Fort Worth, Texas; a sister-in-law Connie Ronholm, Fingal, North Dakota; and nieces and nephews. Funeral arrangements have been entrusted to the care of the Oliver-Nathan Funeral Chapel, Valley City. An online guestbook is available at www.oliver-nathanchapel.com

The graveside memorial service for Terry Pollock, 73, Valley City, North Dakota will be 2 pm Friday, October 1, 2021 at Memory Gardens, near Valley City. He passed away Wednesday, September 22 at his home with his wife by his side under the... View Obituary & Service Information

The family of Terrence "Terry" Pollock created this Life Tributes page to make it easy to share your memories.

Send flowers to the Pollock family.