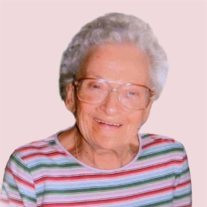 Sybil Truman Witt, 95, passed away at Cozy Country Living in Hawley, MN under the special care of Jeff and Ginger Dauner, on February 27, 2014. She was born August 17, 1918 on a farm near West Concord, MN to Earl and Nellie (Dawson) Hughes. She attended country grade school then high school in West Concord, graduating in 1936. Years later, Sybil attended a year at Interstate Business College in Fargo, ND. In June of 1945, she married Ralph Truman in Seattle, WA. While living in Seattle, Sybil had her first job, she was “Rosie the Riveter” working on the B17 airplanes during WWII at Boeing Aircraft. They later moved to Bismarck, ND before moving to Fargo. While she was living in Fargo, Sybil owned and operated a lunch counter in the Universal Building. She worked as a ward clerk at St. Lukes (Sanford) Hospital for 24 years. She also worked at the Cass County Treasurers Office. Due to Ralph’s failing health, they moved to Wickenburg, AZ. Upon his death in 1972, Sybil returned to Fargo and worked in the hospital again until retiring in 1986. Sybil married August Witt in 1987. They made their home on a farm near Nome, ND. He died in 2006. Her hobbies included gardening, embroidering, crossword puzzles, reading, and walking. Sybil was a member of Zion Lutheran Church in Nome, ND where she was active in WELCA. She was also a member of the Senior Citizens Club in Nome. She wanted her family to remember her for all the good times they had together, that she loved each one dearly, each for their own personality. She had an everlasting gratefulness to them for being so thoughtful and good to her all the time. She said that God blessed her with loving, caring and good children. Sybil is survived by her children, Kay (Leon) Lasha, Colorado Springs, CO, Sandra (Rick) Shelhammer, Canon City, CO, and Janis (Merlin “Poncho”) McDougall, Detroit Lakes, MN; a daughter-in-law, Jean Truman, Ulen, MN; 5 grandchildren, Raymond Lasha, Laura (Avery) Scott, Lisa Rudnik, Lana (Cory) Schatschneider, and Troy (Lizz) Klein; 8 great grandchildren; 3 great great grandchildren; and her furry friends, Moses, Susie, and Daisy. She was preceded in death by her parents; husbands, Ralph Sr. and August; a son, Ralph “Buzz” Truman, Jr.; a step-son, Ron Witt; a step-daughter, Linda Peterson; one brother and a sister. The funeral service for Sybil Truman Witt will be 11:00 AM, Monday, March 3, 2014 at the Oliver-Nathan Funeral Chapel, Valley City. Burial will be in the Lucca Cemetery later in the spring. Visitation will be held an hour prior to the service on Monday. Funeral arrangements for Sybil have been entrusted to Oliver-Nathan Funeral Chapel, Valley City. An online guestbook is available at www.oliver-nathanchapel.com

Sybil Truman Witt, 95, passed away at Cozy Country Living in Hawley, MN under the special care of Jeff and Ginger Dauner, on February 27, 2014. She was born August 17, 1918 on a farm near West Concord, MN to Earl and Nellie (Dawson) Hughes.... View Obituary & Service Information

The family of Sybil Truman Witt created this Life Tributes page to make it easy to share your memories.

Sybil Truman Witt, 95, passed away at Cozy Country Living in...

Send flowers to the Witt family.