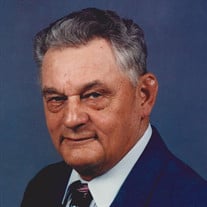 Sidney John Peterson was born July 9, 1924 on the family farm near Dickey, ND. He was the fifth of twelve children born to Henry and Anna (Riedl) Peterson. He passed away at Sheyenne Care Center on Nov. 5, 2018. He attended Dickey Public School. After completing the eighth grade he worked for farmers in the area while helping on the family farm. On November 26, 1943, he entered the U.S. Navy serving in the Philippine Islands, Okinawa and South Pacific during WW ll. His coxswain position put him behind the wheel of the amphibious landing craft while serving on the U.S.S. Baxter. He received an honorable discharge on April 15, 1946. He then returned to his parental home to help with the farming and learned technical skills offered to returning military under the G.I. Bill. A few years later he went to Medical Lake, WA to visit his sister. He found work in that area but was called home to help. It was then that he realized farming was his goal and rented land in the Dickey area. As an adult, he was baptized and confirmed into the Lutheran Faith. On December 24, 1954, he was united in marriage to Ruby Hanson in the Standing Rock Lutheran Church, Fort Ransom, ND. Four daughters, Sandra, Sharon, Sheila, and Shirlyn, were born to this union. They lived at Dickey, ND until moving in 1956 to the Litchville area. In 1965 they purchased a farm in Svea Township. He remained there until entering Sheyenne Care Center on September 15, 2009. Sidney was active in farming which included dairy and beef cattle, hogs, chickens, and grain farming. He was a pioneer to introducing sunflowers and soybeans in this area. Corn had always been raised for silage but 1980 marked the last year of cattle on the farm. He became one of the first in the area to raise corn as a cash crop. Sid was always investigating different ideas. He grew many new varieties or types of small grains. Sid was often called to help someone fix things including mechanical, electrical, plumbing and carpentry work. He enjoyed visits with family, friends and neighbors and taking a drive around the block. Shortcut and back soon were known to mean several miles or hours later. Sidney was involuntarily retired on September 21, 2000, when he had a near fatal accident that resulted in being confined to his new set of wheels--the wheelchair. After beating the odds and countless hours of physical therapy he returned home. For 9 years Ruby and/or Sheila cared for Sidney including home physical therapy, transportation and daily routines. Sidney kept busy with travels via TV, DVDs, including many hours of World War II, and the Talking Book Machine. He liked his John Deere toy collection, Computer Free Cell. He looked forward to family visits and watching farm activities. His physical challenge and inability to farm following the accident not only denied him the gardening and tinkering hobbies but drastically isolated him from the life he loved. Sidney was a member of First Lutheran Church in Litchville. He served on the church council, Svea township board, Harvest States CHS Elevator Advisory Board, Director on AgCountry FCS of Fargo, and a life time member of Leslie Neuman V.F.W. Post # 9315. Survivors include his wife, Ruby; daughters and sons-in-law, Sheila and Tim Cuypers, Litchville, Shirlyn and John Larson, McAllen, TX, Sandra and David Jenkins, Wilton, ND and Stephen Seneker Adrian, MI; nine grandchildren, spouses and eleven great grand-children, Jamie and Micky Doll, Payton,Aubrey and Harper, New Salem, ND; Heather and Kyle Severance, Dakota, Kaitlyn, Grant and Claire, Dickey, ND; Matthew and Kayla Cuypers, Madalyn, Marion, ND; Jonathan and Julie Seneker, Sharon, Lillian and Alice Marie,Wolverine Lake, MI, Aaron and Victoria Seneker, Louisville, KY; Brandon Larson, Bailey Larson, McAllen, TX; Sydney Jenkins, Wilton, ND and Nathan (Emily) Seneker, Adrian, MI. Also surviving is a brother, Leo Peterson, Salt Lake City, Utah; extended family, sisters-in-law, Alice Hanson, Lisbon, ND, Vivian Hanson, Fullerton, ND, and several nieces and nephews. Preceding him in death is a daughter, Sharon Seneker (3-21-2008); his parents, siblings/spouses, numerous relatives and friends. A funeral service will be held Monday, December 31, 2018 at 1:30pm in the Chapel of Saint Raphael, Sheyenne Care Center, Valley City. Funeral arrangements have been entrusted to the care of Oliver-Nathan Funeral Chapel. An online guestbook is available at www.oliver-nathan chapel.com

Sidney John Peterson was born July 9, 1924 on the family farm near Dickey, ND. He was the fifth of twelve children born to Henry and Anna (Riedl) Peterson. He passed away at Sheyenne Care Center on Nov. 5, 2018. He attended Dickey Public... View Obituary & Service Information

The family of Sidney John Peterson created this Life Tributes page to make it easy to share your memories.