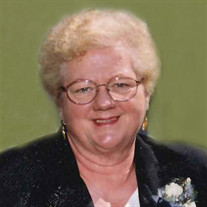 Shirley Ann Stevens, 76, Valley City, ND, formerly of Kathryn, ND, died at Sanford Health in Bismarck, ND on April 13, 2015. She was born June 5, 1938 in Kathryn to Anton and Emma (Anderson) Roberg. She attended grade school at the Daily School near Kathryn and graduated from Hastings, ND, High School. She worked at the Woolworth’s store in Valley City. On October 3, 1959, she married Earl Stevens at First Lutheran Church in Valley City. Earl was an elevator manager and they lived in Hastings and McKenzie, ND before settling in Kathryn. Shirley and Earl worked for Barnes County Parks for many years. Earl died on December 29, 2010. Shirley was a member of St. Paul’s Lutheran Church as well as WELCA in Kathryn. She enjoyed ceramics and sewing, but especially spending time with her grandkids. She is survived by her son, Todd of Litchville, ND; daughter, Dawn (Roger) Lausch of Hannaford, ND; grandsons, Cody and Trevor Lausch; brothers, Clifford (Lyla) Roberg of Billings, MT and David (Sharon) Roberg of Valley City; sisters, Irma Kemmer of Lime Springs, IA and Mary Peterson of Valley City; and several nieces and nephews. Shirley was preceded in death by her parents; husband; brothers, Alton, William, Lloyd, and Dennis; and a sister, Florence Hoff. A memorial service will be held at St. Paul’s Lutheran Church in Kathryn on Monday, April 20, 2015 at 11:00 AM. Burial will be in the Sheyenne Valley Cemetery, near Kathryn. Visitation will be at the Oliver-Nathan Funeral Chapel on Sunday from 1:00 PM until 3:00 PM. Oliver-Nathan Funeral Chapel has been entrusted with assisting Shirley’s family with these arrangements. Please visit www.oliver-nathanchapel to leave condolences in the online guestbook.

The family of Shirley Stevens created this Life Tributes page to make it easy to share your memories.

Send flowers to the Stevens family.