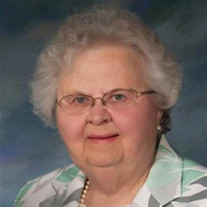 Shirley Peterson Owen, age 83, passed away on October 20, 2018 at Sheyenne Care Center, Valley City, ND. Shirley was born on May 31, 1935 in Thief River Falls, MN to Harlan and Irene (Wrolstad) Peterson. They lived in Viking, MN where her father served as the Lutheran pastor. They moved to Edmore in 1942. After graduating in 1953, Shirley attended Concordia College and got her teaching degree. She taught in Crookston, MN for one year. Shirley and Orlan Melland were married in December, 1956. They had two children: Kathy and Owen. They lived in Grand Forks, St. Thomas, Crystal, and Hoople, ND. Shirley worked for Olson Oil, Hoople Lumber, and H & C Lumber in Cavalier for many years. Shirley married Julian Olson in January 1983. They lived on a farm near Crystal, ND. Shirley loved working in the garden and taking care of her flowers. She was well known for her homemade dill pickles. After Julian passed away, Shirley moved to Park River. In February 2001, Shirley and Paul Owen were married and lived on the farm near Valley City. They spent a lot of years traveling the United States with their camper. Shirley moved to the Sheyenne Care Center in March 2014. She was cared for with love by the wonderful staff members there. Shirley had a beautiful voice and shared it with others by singing solos and hymns in church. The Sheyenne Care Center really looked forward to hearing her at their chapel services. She was also a member of Homemakers, M & M Study Club, and many church woman organizations. When it came time for church bazaars and bake sales, Shirley did not bring just one item – she usually had the whole backseat of her car filled with her delicious food. Shirley is survived by her husband, Paul Owen; daughter - Kathy (Jeff) Lovseth, Devils Lake, ND; son - Owen (Ruth Ann) Melland, Hoople, ND; grandchildren - Jon (Laura) Lovseth, Barry (Amy) Lovseth, Justin Melland (Krystal Moe), and Aaron Melland; step-children: Mary Jo Olson, Kathy (Wylie) Hammond, Bonnie (Tim) O’Keefe, Jon (Barb) Owen, Janet (Dan) Buchin, Joel (Kim) Owen, and Jill (Dave) Engelstad; great grandchildren – Wesley, Kara, Erik, Julia, Emily, and Madelyn Lovseth, Blaire Moe, and Oaklee Melland; sister – Marilyn (Bob) Jernberg; 10 step-grandchildren; 14 step-great grandchildren, and many nieces and nephews. Shirley was preceded in death by her parents, Harlan and Irene Peterson, a sister Joanne (Don) Wolf, and Julian Olson. Funeral Services will be 11 am Saturday, October 27, 2018 at Epworth United Methodist Church, Valley City, ND, with visitation one hour prior to the service. Burial will be held in Park River Sunday, October 28. Memorials may be directed to The Alzheimer's Association or the Valley City Sheyenne Care Center in honor of Shirley. Funeral arrangements have been entrusted to the care of the Oliver-Nathan-Funeral Chapel, Valley City. An online guestbook is available at www.oliver-nathanchapel.com

The family of Shirley Peterson Owen created this Life Tributes page to make it easy to share your memories.

Send flowers to the Owen family.