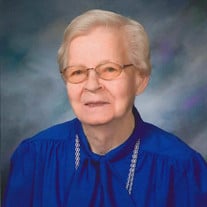 The funeral service for Shirley Ann Nelson, 87, Valley City, North Dakota formerly of Litchville, North Dakota will be 2 pm Monday, July 31, 2017 at First Lutheran Church, Litchville. Visitation will be 4-5 pm Sunday at the Oliver-Nathan Funeral Chapel. Visitation will continue one hour before the service at the church. Burial will be in Nordheim Cemetery near Kathryn, North Dakota. She died Tuesday, July 25, at the Sheyenne Care Center, Valley City. Shirley Ann Knutson was born October 3, 1929 in Valley City, North Dakota, the daughter of Olaf P. and Florence Hazel (Salberg) Knutson. She grew up on the Knutson farm near Kathryn and attended grade school at Sand Prairie country school and graduated from Kathryn High School in 1947. She was united in marriage to Vernon Nelson on June 23, 1949 in Fort Ransom, North Dakota. They farmed and raised their family on the Sand Prairie. Shirley was a member of the Nordheim Lutheran Church and the WELCA of the church. Shirley and Vernon served on the Nordheim Cemetery Board for many years. Shirley was co-chairman of the Nordheim Church Centennial Celebration in 1983, and was a member there until it closed in 1994. Vernon and Shirley sold the farm and moved to Litchville in 1994, where they joined the First Lutheran Church. She was a very dedicated member of the quilter group in the church and often sewed squares together at home for the quilts. She worked several years at the Rib Rack Café in Litchville and at Sandy’s Corner Convenience. Vernon died on November 9, 2008. Shirley continued to live in Litchville until September 2011, when she moved to Valley City. She entered the Sheyenne Care Center in 2014. Shirley is survived by two sons, Danny (Sandy) Nelson, Kathryn and Dennis (Shelly) Nelson, Litchville; one daughter, Janice (Donald) Olafson, Valley City; eight grandchildren: Darren Nelson (Jodean Witt), Marion, ND, Danelle (Kurt) Nelson, Kearney, NE, Dani Marie (Levi) Heinrich, Holcomb, KS, Rebecca (Nick) Gray, Edgeley, ND, Mark (Amanda) Olafson, West Fargo, ND, Kristen Bear (Todd Paintner), Valley City, Holly (Tim) Johnson, Litchville and Tracy (Dillon) Carpenter, Litchville; and 16 great grandchildren. She is also survived by a sister-in-law, Marlys (Richard) Christ, Valley City; a brother-in-law Howard (Ruth) Nelson, DesMoines, WA; and several nieces and nephews. She was preceded in death by her husband, parents and her brother, Omar Knutson. Funeral arrangements have been entrusted to the care of the Oliver-Nathan Funeral Chapel, Valley City. An online guestbook is available at www.oliver-nathanchapel.com

The family of Shirley Ann Nelson created this Life Tributes page to make it easy to share your memories.