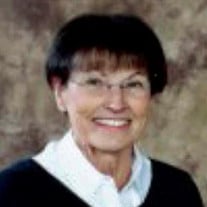 Sharon Ann (Slater) Klein, from Sanborn, North Dakota, passed away at her home on Saturday, April 16, 2016, following the continued care from her husband, her children, and the support of the Hospice staff. Visitation will be from 4 – 7 pm on Monday, April 18th at the Sacred Heart Catholic Church in Sanborn, with a prayer service at 7 pm. Visitation will continue at 9:30 am on Tuesday, April 19th, followed by a Funeral Mass at 10:30am, at the Sacred Heart Church. Burial will be in the Sacred Heart Cemetery. Sharon was born in Valley City, North Dakota on January 31, 1947 to Earl and Helen (Kleingartner) Slater. She was a baptized and confirmed member of the Minnie Lake Lutheran Church and graduated from Pillsbury High School in 1965. She married Robert Klein, Jr. on May 25, 1968 in Sanborn. They resided at their farm home in Sanborn, North Dakota, where she and Bob raised five children: Jason (Joan) from Eckelson, ND, Tracy (Bill) Heinze from Wimbledon, ND, Jon, Mary (Carl) Wieland from Spicer, MN, and Brent (Amy) from Casselton, ND. Bob and Sharon continued their farming operation until their retirement in 2010. Sharon’s gift was supporting her children and grandchildren, who were each made to feel important and special. She created a home that was welcoming to all, making each person feel like a member of her family. She had a giving and generous nature, putting others before herself. Sharon enjoyed her coffee dates with friends, monthly Birthday Club gatherings, her membership with the Eckelson-Sanborn American Legion Auxiliary, and her involvement with the Sacred Heart Circle. She lifted everyone up in prayer, leading a life filled with kindness, compassion and thoughtfulness. Sharon was preceded in death by her father, Earl, her son Jon and infant son Thomas, and an infant sister. Additional survivors include the grandchildren who lovingly referred to her as ‘Grandma Turner’: Kyle and Sara Heinze, Kendra and Allison Klein, Landon, Chase and Shea Klein, Ella and Russell Wieland, Braden and Easton Klein, her mother, Helen Slater, siblings Mark (Becky) Slater and Marilyn (Wade) Ihry, her father-in-law, Robert Klein, and Bob’s siblings, Marsha (Dennis) Wendel, Bill (Nina) Klein, Jane (Dave) Hovda, along with numerous aunts, uncles, cousins, nieces and nephews. Funeral arrangements have been entrusted to the care of the Oliver-Nathan Funeral Chapel, Valley City. An online guestbook for Sharon is available at www.oliver-nathanchapel.com

Sharon Ann (Slater) Klein, from Sanborn, North Dakota, passed away at her home on Saturday, April 16, 2016, following the continued care from her husband, her children, and the support of the Hospice staff. Visitation will be from 4 &#8211;... View Obituary & Service Information

The family of Sharon Klein created this Life Tributes page to make it easy to share your memories.

Send flowers to the Klein family.