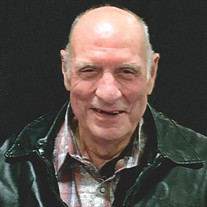 Selmer John Dykstra was born June 28, 1942 in the hospital at Marion, North Dakota to John and Ann (De Vries) Dykstra. He attended school at Svea and graduated in 1960. Selmer entered the US Army in October of 1961 and spent six months at Fort Carson, Colorado and then he spent the remainder of his service in Hawaii until his discharge in October of 1964. He attended NDSCS at Wahpeton, ND and graduated with a degree in Refrigeration in 1968. On May 4, 1968, Selmer married Katherine Eidoen from McHenry, North Dakota. They lived five years in Sioux Falls, South Dakota working in refrigeration with A1 Appliance for four years and as a semi truck driver for Pam Oil for one year. They moved back to North Dakota on April 1, 1974 and started farming on his dad’s farm in Rosebud and Svea Townships, north of Litchville, where they currently reside. Selmer was a member of the Elim Evangelical Free Church of Litchville and Valley City. He served on the church board, Farmers Union board and township board. He enjoyed farming, visiting with friends and family, and spending time with his grandkids. Selmer is survived by his wife of 50 years, Katherine; a daughter, Darla (Stephen) Beauclair, Davenport, North Dakota; a son, DeLray (Linette) Dykstra, Litchville; three step granddaughters, Roxanne, Desiree and Jade; four granddaughters, Faith, Averi and Jasmine Beauclair, and Hannah Dykstra. He is also survived by three sisters, Reneé Feldman, Joan (Stan) Hase, and Barbara (George) Bauer; a sister-in-law, Shirley (Chuck) Christianson; nephews, Michael and Cameron Feldman, Douglas and Troy (Barb) King, Scott (Jessica) Anderson, Daniel (Justine) and Kevin Bauer, Roger (Denise) Christianson; nieces, Taralyn Borah and Reneé Christianson; and great nephews and nieces. Selmer died Friday, July 27, 2018 at his home at the age of 76. He was preceded in death by his parents, father-in-law and mother-in-law, Roy and Ellenore Eidoen; a sister and brother-in-law, Hattie and James King; brother-in-laws, Andrew Feldman, Floyd Anderson, and Raymond Eidoen; and a nephew, Raymond (Trent) Eidoen. The funeral service will be 10:30 am Tuesday, July 31, at Elim Evangelical Free Church, Valley City. Visitation will be 5-7 pm Monday at the Oliver-Nathan Funeral Chapel, Valley City, with a prayer service at 7 pm. Visitation will continue Tuesday one hour before the service at the church. Burial will be in Vasa Cemetery, rural Litchville. Funeral arrangements have been entrusted to the care of the Oliver-Nathan Funeral Chapel. An online guestbook is available at www.oliver-nathanchapel.com

Selmer John Dykstra was born June 28, 1942 in the hospital at Marion, North Dakota to John and Ann (De Vries) Dykstra. He attended school at Svea and graduated in 1960. Selmer entered the US Army in October of 1961 and spent six months at... View Obituary & Service Information

The family of Selmer John Dykstra created this Life Tributes page to make it easy to share your memories.

Send flowers to the Dykstra family.