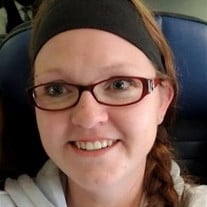 Sara Renee Aarseth was born August 17, 1983, the daughter of Allen and Renee (Maasjo) Aarseth in Valley City, North Dakota. She lived in Nome, North Dakota and was baptized at Messiah Lutheran Church and attended Enderlin Public School through the fourth grade. Then they moved to the farm near Fingal and she attended Maple Valley Public School and graduated in 2001. At the age of 16, she trained to be a Certified Nurses’s Assistant and worked at the Sheyenne Care Center in Valley City for 18 years. She loved and cared for many residents over the years. During that time, she also helped care for her grandma, Edna Maasjo in her home for 3 years. She was a member of the WELCA of Messiah Lutheran Church in Fingal and the John V Raaen American Legion Unit 187 Auxiliary of Fingal. Sara married the love of her life, Jason Walker, on June 23, 2006. To this union two beautiful daughters, Abby and Brianna, were born. She loved working on cars and going to car shows with Jason and their daughters. She also enjoyed fishing, canoeing, camping, deer hunting, playing darts, shopping, and her special country drives with her best friend, Jane Spaulding. She leaves behind her husband, Jason Walker; daughters, Abby age 11 and Brianna age 9; her parents, Allen and Renee Aarseth; brother, Jason (Peggy) Aarseth and their children, Dylan and Payton; sisters Amy Perdue and her children, Samantha, Jacob (Shelby), Jailee and Teanna and Tammy (Steve)Brantley; grandmother, Edna Maasjo, mother and father-in-law, Everett and Michelle Walker; sister-in-law, Heidi Gould; brother-in-law Josh (Jeannie) Walker and their children Cash and Trinity; uncles Eldon (Shari) Maasjo and family; Ray Aarseth and Loren Aarseth and their families; aunt Susan (Steve) Hanson and family; and more extended family. Sara was preceded in death by her grandparents Randolph Maasjo, Archie and Carol Aarseth; uncles Duane Aarseth and Donald Aarseth ; and aunt Verlaun Aarseth .

The family of Sara Renee Walker created this Life Tributes page to make it easy to share your memories.

Send flowers to the Walker family.