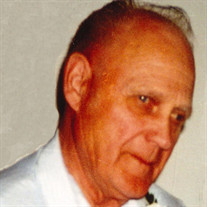 Sanford (Sandy) A. Sivertson, second son of Selmer and Olga (Iverson) Siverton, was born September 6, 1928 on the family farm near Carbury, ND in Bottineau County. He attended rural school there and as young man, he worked for area farmers and then got a job with Great Plains Supply Company. The job took him to living in many towns. In October 1953, he married Donna Johnson of Plaza, ND. To this union four children were born; Connie, Deb, Pattie, and Rodney. Finally after a number of years, Sandy, took the job as manager of Great Plains Supply Company in Kathryn, ND. They bought a home and settled in. Sandy drew floor plans and built homes on yard land and sold them or built on the buyer’s site. He was active in the Kathryn city council for a number of years. The family was members of St. Paul’s Lutheran Church. In 1985, Sandy retired due to a back injury and surgery. Donna passed away in 1995. In May 2001, he married Shirley Reisnour and they continued to live in Kathryn until May 2018 when they moved to Jamestown. Sandy entered Ave Maria Village on February 25, 2019 and passed away Thursday, May 2, 2019. Sanford was preceded in death by his first wife, Donna; his parents Selmer (Sam) and Olga; brothers, Norris (Bud), Lloyd, Glen, Norman and his sister Evelyn; brother-in-law John Pedie Sr.; and sister-in-laws Mavis and Janet. He is survived by his wife Shirley; daughters, Connie Sivertson, Valley City, ND, Debbie (Jeff) DeVillers, Perham, MN, Pattie Kapaun and a son Rodney (Eileen) Sivertson both of Fargo, ND; grandchildren, Danielle DeVillers and Nicholas DeVillers both of Perham and Cody (McKinzie) Sivertson, Fargo, six stepchildren, 12 step grandchildren, a large number of step great grandchildren as well as many nieces and nephews. Along with brothers; Lyle of Landa, ND and Kenny of Bottineau, ND and sisters; Florence Pedie and Shirley Kofoid both of Bottineau and Gladys Stevens of Valley City. In lieu of flowers, memorials are preferred to Ave Maria Village, Jamestown Regional Medical Center Hospice, or St. Paul’s Lutheran Church, Kathryn, ND. Visitation will be 5-6 pm Monday, May 6 at Oliver-Nathan Funeral Chapel, Valley City and will continue one hour before the service at 1:30 pm Tuesday at the funeral chapel. Funeral arrangements have been entrusted to the care of the Oliver-Nathan Funeral Chapel. An online guestbook is available at www.oliver-nathanchapel.com

Sanford (Sandy) A. Sivertson, second son of Selmer and Olga (Iverson) Siverton, was born September 6, 1928 on the family farm near Carbury, ND in Bottineau County. He attended rural school there and as young man, he worked for area farmers... View Obituary & Service Information

The family of Sanford "Sandy" Sivertson created this Life Tributes page to make it easy to share your memories.

Send flowers to the Sivertson family.