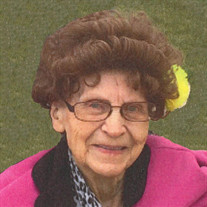 Ruth Clark, a spirited and avid story teller about her life in the Turtle Mountains of North Dakota, passed away January 17, 2019 at the Sheyenne Care Center, Valley City, at the age of 93. Ruth Fauske was born August 1, 1925 in Rolette, North Dakota to her parents, Johannes and Anna (Ludvigson) Fauske. Ruth’s experience of growing up in the rural, tight knit community of the Turtle Mountains affected her for the rest of her life. In any conversation, she was sure to find a way to share stories about that beloved time. As a child, her father would hold worship meetings in their home and the family also attended schoolhouse gospel meetings held by her future father-in-law. It was during this time that Ruth accepted the Lord Jesus Christ, as her loving Savior. Her father died when she was still at home and the family moved several times including spending a year in California before moving back. She also tragically lost her brother, David, in what was thought to be a hunting incident. Ruth often shared about the loving support from neighbors and friends during this period. She attended school in the Turtle Mountains area which was a struggle, but she was determined to finish her education. Ruth eventually moved to Valley City and worked as a nanny as well as working at the Fair Store while going to College High. After graduating Ruth married Eldon Clark, whom she had met years earlier at one of the schoolhouse gospel meetings, on October 23, 1945 in Valley City. They raised four children, Gary, Dennis, Rebecca, and Kathryn Jo. Ruth loved to go out to eat. She played lots of games and spent hours putting puzzles together. Ruth had not only been employed at the Sheyenne Care Center in Activities during her working years, but continued to be a volunteer long afterward. In 2003, Ruth was able to fulfill a lifetime dream and traveled to Norway. She was so pleased to meet her Norwegian family whom the family still maintains close relations with. One of the most important aspects of Ruth’s life was her faith. Ruth was a wonderful example of being bold in her love of Jesus. As the family went to restaurants, she left Bible Tracts (cards of Faith) on the tables. The whole family enjoyed attending Story Book Lodge Christian Camp, Gilbert, Minnesota for many years. After more than 50 years of marriage, Eldon passed away on September 26, 1998. She was preceded in death by her parents, husband, Eldon, sisters Naomi and Lydia, and brothers Elwood and David. Ruth is survived by Gary (Carol) Clark, Horace, North Dakota; Dennis (Jane) Clark, Yellowstone National Park; Becky Clark Schilke, Eaton, Colorado; Kathy Jo (David) Pfeifer, Silverthorne, Colorado; eight grandchildren, Joshua Clark, Daniel Clark, Alicia Clark, Tara Laufert, Travis Schilke, Jared Pfeifer, Wade Pfeifer and Hailey Pfeifer; and two sisters-in-law, Irene Clark, Valley City and Eleanore Fauske, Bottineau, North Dakota. Memorials may be directed to Story Book Lodge Christian Camp, 5079 Vermilion Trail, Gilbert, MN 55741. Visitation will be held 2 -3 pm Sunday, January 20, with a prayer service at 3 pm at the Oliver-Nathan Funeral Chapel, Valley City. The funeral service will be 11 am Monday at the funeral chapel. Funeral arrangements have been entrusted to the care of the Oliver-Nathan Funeral Chapel. An online guestbook is available at www.oliver-nathanchapel.com

Ruth Clark, a spirited and avid story teller about her life in the Turtle Mountains of North Dakota, passed away January 17, 2019 at the Sheyenne Care Center, Valley City, at the age of 93. Ruth Fauske was born August 1, 1925 in Rolette, North... View Obituary & Service Information

The family of Ruth Clark created this Life Tributes page to make it easy to share your memories.

Ruth Clark, a spirited and avid story teller about her life in...

Send flowers to the Clark family.