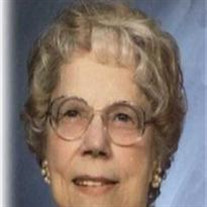 Evelyn Ruth Moir was born August 4, 1932 on a farm southeast of Andover, SD. Her parents were Walter W. and Alma C. (Huwe) Moir. On August 1, 1933 the family moved to a farm 6 ½ miles northwest of Webster, SD. Ruth attended grade school at North Webster #104 and graduated from Webster High School. She attended Northern State Teachers College in Aberdeen and in August 1952 received a First Grade Elementary Diploma. She taught rural schools Raritan #196 in Day County and Meland #53 in Codington County. She was united in marriage to Grant N. Carlson of Mandan, ND, the son of Hilmer and Hazel (Curtis) Carlson, on June 14, 1953 at Bristol, SD. They made their home in Mandan, ND, where she worked for several years as a secretary/clerk for the County Superintendent of Schools. The Carlson family lived in Cleveland, Mott, and Valley City, ND where Grant served as a pastor. After moving to Valley City, Ruth was employed as a nurse’s aid at Mercy Hospital. Then she attended the State School of Science at Wahpeton, ND and became a Licensed Practical Nurse in September 1975. She was again employed at Mercy Hospital. She later worked for the Minneapolis Medical Research Foundation/Regional Kidney Disease Program as a dialysis nurse in Valley City for 6 years. Rev. Grant Carlson died on March 2, 1995 in Fargo, ND. Ruth continued to make her home in Valley City. On October 25, 1997, she married A. Neal Snow in Valley City, where they made their home. Ruth was a member of Epworth United Methodist Church and the UMW. She enjoyed doing genealogy and leather crafts, and was an avid Barbie Doll collector. She is survived by her daughter, Marilee Joy Bainbridge of Morristown, AZ; sons, David Grant and his wife Paula Carlson of Arlington, TX, and Jerry Glenn Carlson and his companion, Anthony Phillips of Whitewater, CA; grandchildren, Kathryn Mikaela Bainbridge of Morristown, AZ, Corey David Carlson of Arlington, TX, and Ian Reece Bainbridge of Morristown, AZ; sisters, Darlene and Charles Finney of Mobridge, SD, Ellen and Richard Bailey of Charlotte, NC, and Joyce Helgeson of Humboldt, SD; and many nieces and nephews. She was preceded in death by her parents; first husband, Grant; and infant twin brothers.

The family of Ruth Carlson Snow created this Life Tributes page to make it easy to share your memories.