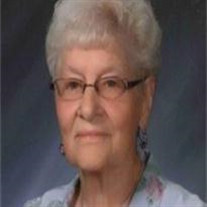 Ruth Arlene (Kuist) Baumann, 91, of Valley City, passed away peacefully in her sleep early Tuesday morning, January 8, 2013. Ruth was born on June 12, 1921 to Gordon and Eunice (Ring} Kuist in Minot, ND. She graduated from Minot Model High School and Minot State Teacher’s College and then moved to Westhope, ND where she taught elementary school. A priority for Ruth and Robert was instilling a desire for higher education among their three generations of descendants. Ruth married Robert Frederick Baumann on January 3, 1944. They lived in Westhope until 1960 and then moved to Park River, ND where they owned and operated Bowl-Mor Lanes until 1981. Ruth was well known for her delicious home baked goods, especially her brownies. She was a home-maker until 1968 when she began working in clothing retail until her retirement in 1995. Ruth was involved in St Mary’s Catholic Church and St. Ansgar’s Hospital Auxiliary in Park River. She was a devoted bowler for over 30 years and every Saturday for years baked home-made bread, rolls and fritters for her family. She never complained about the 30,000+ cloth diapers she laundered for her ten children. Ruth was a skilled seamstress sewing clothing for her children and grandchildren. She was also quite a gifted craftsperson, creating Christmas gifts for her family each year and donating many of her creations to fundraising events within her community. She was the ultimate “fashionista” as she took great pride in being elegantly dressed. She loved her flower gardens and a good sit down home cooked meal with dessert added. Ruth modeled her Catholic faith, enjoyed music and especially loved family gatherings with her legacy of 100+ descendants. In a quiet strength, she was an example of kindness to her family and everyone she touched. She unconditionally loved everyone, accepting them for who they were. Her children learned to be creative, independent and determined to “figure it out”. She was a model of strength, never complaining through many physical and serious health setbacks. In 1996, she moved to Jamestown, ND to be closer to her youngest daughter Patricia and family. She then followed them to Valley City, ND in 2000, living in her home until March of 2012 when she moved into the Sheyenne Care Center. Ruth was preceded in death by her husband, Robert in 1989, her infant daughter Karolyn Kay, her parents Eunice and Gordon, brother’s Blaine Kuist, Gordon Kuist, and Dale Kuist; and her sister Margaret Kuist. She is survived by her children: Michael (Marlys) Baumann, Ottertail Lake, MN; David (Jenean) Baumann, Reiles Acres, ND; Dianne (Al) Prentice, Maple Grove, MN; Gerald (Marji) Baumann, Tempe, AZ; Timothy (Meredith) Baumann, Grand Forks, ND; Cheryl (Sean) Kelly, Lisbon, ND; Cynthia (Richard) Dunsmore, Forest Lake, MN; Kenneth (Cheryl) Baumann, Eagan, MN; Margaret (Richard) Aho, Park Rapids, MN; Patricia (Mark) Oberlander, Valley City, ND. She is also survived by 29 grandchildren, 32 great-grandchildren, sisters, Gayle Bakkom, Bellingham, WA; Gloria Mulvihill, Salem, OR; Meredith Pratt, Bismarck, ND and several nieces and nephews.

The family of Ruth Baumann created this Life Tributes page to make it easy to share your memories.

Send flowers to the Baumann family.