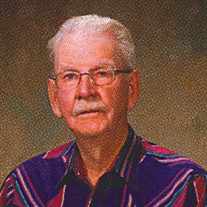 Russell “Russ” Solheim, 92, Valley City, ND formerly Kathryn, ND died Saturday, May 29, in Sanford Health Fargo, ND surrounded by his family. Russell Ambrosius Solheim was born April 15, 1929 to Theodore and Alma (Bryne) Solheim in rural Kathryn. He was baptized and confirmed at Waldheim Church in Kathryn where he was a lifelong member. He attended Lindvold School until the eighth grade and then farmed with his father in Norma Township near Fingal, ND. Russell was married to Judith Lund in January of 1949, his friend and neighbor he grew up with celebrating 72 years together. In their early years together, they moved to Minneapolis where Russell worked for a lumber company. He then moved on to construction in the late 1950’s. After working in Minneapolis, Russell and Judith returned to his family farm in Norma Township. He bought three gravel trucks in 1953, 1956 and 1958 hauling gravel for Barnes County. On July 7, 1959, Russell and Judith welcomed their daughter Rebecca Laurie. Russ worked many years for the Barnes County Highway Department including being shop foreman. In 1977, Russell and Judith moved to Valley City. Throughout Russ’s lifetime he enjoyed many things including riding horse, going to auction sales, playing cards with his buddies, morning coffee at local restaurants, Fort Ransom, Sodbusters, snowmobiling and buying and selling cars. Most of all he cherished the time spend with family, especially his grandson Jordan fishing on Lake Ashtabula and woodworking together. Russell is survived by his wife, daughter, Becky Sorby; grandson, Jordan Sorby; nephew, Skippy (Mary) Solheim and several great nieces and nephews. Russell is preceded in death by his parents; brothers, Duane Solheim, Ernie (Grace) Solheim, Hollis Solheim; sister Alvira (Art) Maasjo; and niece Gayle Love. Visitation will be from 5:00 pm - 7:00 pm with a prayer service at 7:00 pm, Thursday, June 3 at Oliver-Nathan Funeral Chapel, Valley City. The funeral service will be 10:30 am, Friday, June 4 at Waldheim Church, Kathryn with visitation one hour before the service. Burial will be in Waldheim Cemetery, Kathryn. Funeral arrangements have been entrusted to the care of the Oliver-Nathan Funeral Chapel, Valley City. An online guestbook is available at www.oliver-nathanchapel.com

The family of Russell Solheim created this Life Tributes page to make it easy to share your memories.

Send flowers to the Solheim family.