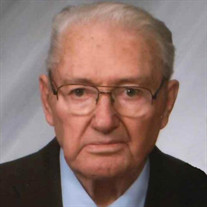 Russell Wayne Brudevold, 97, Valley City, North Dakota, passed away on Saturday, October 17, at the Sheyenne Care Center. Visitation will be 1-4 pm Friday, October 23, at Oliver-Nathan Funeral Chapel, Valley City with graveside services following at 4:45 pm at the Page Cemetery, Page, North Dakota. Russell Wayne Brudevold was born July 18, 1923 in Page to Floyd and Hilda (Froysland) Brudevold. He was salutatorian of his graduating class of 1942 from Pillsbury, ND. He served with the United States Army from May 23, 1945 to January 5, 1946. Russell was united in marriage to Ardith Lina Maria Hicks on December 8, 1946. Russell and Ardith farmed in Minnie Lake Township living on the farm (homesteaded by his great-grandfather John Hobbis) where Russell was born. In 1993, Russell retired from farming and he and Ardith spent many summer vacations pulling a camper to Holter Dam, Montana and wintering in Arizona. Russell enjoyed elk hunting, his favorite spot being Diamond Bar X Ranch in Augusta, MT where he was able to share and pass down this passion to his nephew Darrel, who was like a son to him. Russell was a lifelong member of Page United Methodist Church. He served on The Minnie Lake Township Board. Russell is survived by Darrel (Ruth) Brudevold, Page; Gene Brudevold, Valley City; his brother, Forrest (Ardell) Brudevold, Valley City; grandnephew, Jeremy (Alayna) Brudevold, Fort Ransom, ND ; grandniece, Angela (Lee) Griffith, Mahtomedi, MN; grandnephew, Mason Brudevold; grandniece, Taylor (Ethan) Mattingley and their children Brody, Avery, and Lakyn; niece-in-law, Lori Brudevold; and “the little ones” as Russell referred to them, Corbin and Leigh Brudevold and Evan, Quinlan, and Scarlet Griffith. Russell is preceded in death by his parents, wife, and nephew Lynn Brudevold. Darrel would like to thank the Sheyenne Care Center for their care of Russell. Funeral arrangements have been entrusted to the care of the Oliver-Nathan Funeral Chapel. An online guestbook is available at www.oliver-nathanchapel.com

The family of Russell Brudevold created this Life Tributes page to make it easy to share your memories.

Send flowers to the Brudevold family.