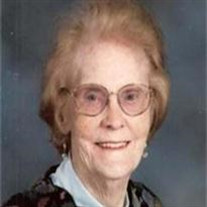 Ruby Rietze, 92, of Valley City passed away March 29 in Lakeland, FL where she had been staying for the winter with her son Les and daughter-in-law Joan. Ruby Irene Maine was born October 23, 1919 in Luverne, ND to Alonzo Verne Maine and Minnie Mae (Smith) Maine, the second of seven children. Ruby attended schools in Valley City and lived there nearly all of her life except for a brief time when she worked in Minneapolis. Ruby was united in marriage to Herman Rietze November 1, 1940. The couple farmed northeast of Valley City and together they raised four children. Ruby’s first love was her family and her friends. She thoroughly enjoyed visiting with almost everyone. Ruby was an active homemaker and enjoyed gardening and canning fruits and vegetables. She especially enjoyed her lilacs and perennial flowers. She volunteered as a Cub Scout Pack leader while her three sons were growing up. She was active in Trinity Lutheran Church circles and assisted with quilting projects. She served as treasurer for WELCA circles for many years. Ruby is survived by two sisters, Violet Rietze of Valley City and Marcella Richards of Kelso, WA, a brother Chester (Delores) of Kelso, WA, two sons, Daniel (Jean) of Anchorage, AK and Leslie (Joan) of Lakeland, FL. Survivors include one granddaughter Danielle (Kirby), Anchorage, AK and seven grandsons, Paul of Portland, OR, Robert of Clinton Township, MI, Richard of Tampa, FL, Perry of Clermont, FL, Joey Myers, Minneapolis, Casey Myers, Minneapolis, and Mathew Myers, Seattle, as well as many great grandchildren, nieces, and nephews. Ruby was preceded in death by her husband Herman, one sister Esther (Evenson) of Albany, OR, two brothers, Leonard of Clatskanie, OR, and Melvin of Valley City, a son Kenneth, a daughter Melodie (Myers) and granddaughter Angela Kay (Myers).

Ruby Rietze, 92, of Valley City passed away March 29 in Lakeland, FL where she had been staying for the winter with her son Les and daughter-in-law Joan. Ruby Irene Maine was born October 23, 1919 in Luverne, ND to Alonzo Verne Maine and Minnie... View Obituary & Service Information

The family of Ruby Rietze created this Life Tributes page to make it easy to share your memories.

Send flowers to the Rietze family.