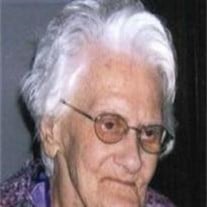 Rosalia Alvina Wegner was born August 5, 1914 to Albert and Pauline (Tonn) Wegner. She grew up in the Ellendale, ND area and attended school at Ellendale Normal, later moving to Montpelier where she graduated from high school. After graduation she went to hair dressing school. She moved to Denver, CO and worked in the banquet and catering service later purchasing her own café which she called Rosalia’s. After the sale of her café, she moved to Wenatchee, WA near her mother and was employed at the Eye and Ear Hospital. She married Donald Anderson on August 17, 1968. They lived on the farm at Dazey, ND for two years. Rose and Donald then moved and managed a motel and apartment house their. After her mother passed away they moved to Winter Haven, CA, where they lived for 17 years. Rose’s days were spent volunteering in programs for the aging, the AARP Council, going to her Bible study group, and belonging to their Road Runner Dance Club. They returned to ND in 1995 to be near family as their health was failing. Rosalia leaves 6 step children, Darlene (Lloyd) Johnson of Dickinson, ND, Donald (Mary) Anderson of El Mirage, AZ, Dorothe Jean Hetland of Hillsboro, ND, Dennis (Kim) Anderson of Ashby, MN, Darryl (Joan) Anderson of Gillette, WY and Debra (Lyle) Hoverson of Kasota, MN; 17 step grandchildren; 27 step great grandchildren; a step great great grandchild; a half sister, Alice Collingwood of Portland, OR; a son-in-law, Don Heinze of Center, ND; and several nieces and nephews. She was preceded in death by her husband, Donald; a sister, Sophie; a half sister, Dorothy; 2 step sisters; and 2 step brothers; 2 step daughters, Donna Mae and DeLois; 3 step grandsons, Clay, David, and Ronnie; 2 sons-in-law, DuWayne and David; a daughter-in-law, Pam; and her parents. At the time of her death, she was making her home with her granddaughter, Zoe Ann and her family at Hanover, ND. We will miss you Rosie---we loved you so much.

Rosalia Alvina Wegner was born August 5, 1914 to Albert and Pauline (Tonn) Wegner. She grew up in the Ellendale, ND area and attended school at Ellendale Normal, later moving to Montpelier where she graduated from high school. After graduation... View Obituary & Service Information

The family of Rosalia "Rosie" Anderson created this Life Tributes page to make it easy to share your memories.

Rosalia Alvina Wegner was born August 5, 1914 to Albert and Pauline...