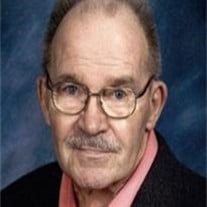 Ronald Q. Johnson died peacefully Sunday, January 16th in Mesa, Arizona with his wife, Joyce and daughter, Becky at his side. Ronald (better known as “R.Q.”) was born in Cooperstown, North Dakota, to Melvin and Margaret Johnson on December 7, 1926. Five years later he moved to Elbow Lake, Minnesota where he grew up loving music – singing and playing trumpet – while also engaging in every sort of competitive sport. He graduated from Concordia College, Moorhead, Minnesota where he was active in the concert band and played both football and baseball. He served in the U.S. Army's 317th Army Band at Camp McCoy, Wisconsin for two years during the Korean Conflict. In 1951 he married his college sweetheart, Joyce Wetherbee in Fairmount, North Dakota. He began his teaching career as director of bands and choirs in Bagley, Minnesota where he served from 1953 to 1966. During this time, he received his Masters Degree in Music Education from Northern Colorado State University. From 1966 to 1970 he directed the Concert Band and Waldorf Singers at Waldorf College, Forest City, Iowa. Upon moving to Valley City State University he directed the Concert Band and Marching Band while serving as Chairman of the Music Department and Fine Arts Department. His passion for teaching, his devotion to music education and the training of future music teachers led him to direct festival bands and adjudicate music contests in the upper Midwest. During his career he was on the summer faculty of the International Music Camp, Peace Gardens, North Dakota and Arrowhead Music Camp, Barnum, Minnesota. In 2008 R.Q. was inducted into the Valley City State University Music Department Hall of Fame. He was an honorary member of Phi Beta Mu, the International School Band Master Fraternity. He served as a church choir director and tenor soloist and trumpet player throughout his life. Whether it was “The Lord's Prayer,” or “How Great Thou Art” at a wedding or funeral, or “O Holy Night” at a Christmas Eve service, he willingly shared his talents. In his leisure time he was an avid golfer (who often thought his next putter was the answer to an improved game.) He hunted and fished with his family and always wished the Minnesota Twins were playing just a little better. In 1978 he and his wife, Joyce began what would be 20 years of summer management positions with the Theodore Roosevelt Medora Foundation in Medora, North Dakota. Following his retirement in 1992 they enjoyed balmy winters in Mesa, Arizona where R.Q. played trumpet with Myron Summerfeld's Orchestra and directed a neighborhood community choir. A devoted husband, father, grandfather and great-grandfather, R.Q. is survived by his loving wife, Joyce of 59 years; son, Paul (Judy) Johnson, Medford, Oregon; daughters, Bonnie (Brian) Alton, St. Paul, Minnesota and Becky (Terry) Kadrmas, Vancouver, Washington; grandchildren, Medora (Paul) Benson, Josh, Abigail, and Katherine, great grandchildren Barrett, Bjorn and Brygg; and his brother, Gordon Johnson. He was preceded in death by his parents, brother Miles, and son, Craig.

Ronald Q. Johnson died peacefully Sunday, January 16th in Mesa, Arizona with his wife, Joyce and daughter, Becky at his side. Ronald (better known as “R.Q.”) was born in Cooperstown, North Dakota, to Melvin and Margaret Johnson on December... View Obituary & Service Information

The family of Ronald "R.Q." Johnson created this Life Tributes page to make it easy to share your memories.