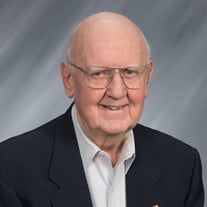 Ronald Irvin Tolstad died peacefully in his home surrounded by loved ones on August 24, 2018 in Valley City, ND. He was 83 years old. Ron was born on September 12, 1934 to Albert and Johanna Tolstad on the Tolstad family farm near Dazey, ND. He graduated from Dazey High School in 1952. He attended NDSU where he was a proud member of the Alpha Gamma Rho Fraternity. In 1953, Ron and childhood friends, Gerry Bender and Doug Quick, enlisted in the Army. He was honorably discharged in 1955 and returned to NDSU for another year. Ron married the love of his life, Billie LaVonne Ledbury, on September 2, 1956. They were a team for 47 years. They lived in Grand Forks before moving to Valley City where they owned and operated Ron’s Body Shop from 1965 to 1999. Ron lived and taught his children a life of service. Along with his proud service in the Army, he was a member of Our Savior’s Lutheran Church, a 56-year member of Dazey American Legion Post 0149, a 50 year member of Eagles Aerie Post 2192, two time Commander of VFW Post 2764, served in the VFW Color Guard, a lifetime member of the Order of the Cooties, and a third generation member of the Elks. In 2016, Ron had the privilege to attend the WDAY Honor Flight to Washington, D.C. with friend Dave Zeller and other veterans. He talked about the trip with great pride and enthusiasm. He is preceded in death by his parents, wife, and brothers Alan Tolstad, Ray Tolstad and sister JoAnn Bakken. Ron is survived by his kids: Pat France (Jeff) of Loretto, MN; Lorrie Coker (Travis) of Abilene, TX; Ron Tolstad, Jr. (Maurine) of Bismarck, ND; and Vicki Kopplin (John) of Coon Rapids, MN. He also cherished his six grandchildren, Jason France (Amanda), Osterburg, PA; Jessie France (David Andrs) of Richfield, MN; Ruby Tolstad, Bismarck, ND; CPL, USMC, Matt Kopplin of San Diego, CA; and Becca Porter (Drew) of Madison, WI. He had four great-grandchildren, Madison and Owen France, Cameron Andrs and Charles France and countless nieces and nephews. The funeral service will be held at 2 p.m. Tuesday, August 28 at Our Savior’s Lutheran Church in Valley City, ND. Immediately following the service, the burial will be held at Memory Gardens. Visitation will be at Oliver Nathan Funeral Chapel, Valley City on Monday, August 27 from 5 to 7 pm.

Ronald Irvin Tolstad died peacefully in his home surrounded by loved ones on August 24, 2018 in Valley City, ND. He was 83 years old. Ron was born on September 12, 1934 to Albert and Johanna Tolstad on the Tolstad family farm near Dazey, ND.... View Obituary & Service Information

The family of Ronald Irvin Tolstad created this Life Tributes page to make it easy to share your memories.

Ronald Irvin Tolstad died peacefully in his home surrounded by...

Send flowers to the Tolstad family.