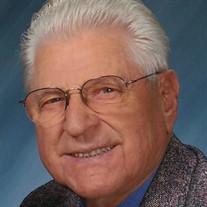 Roland “Stugie” Stugelmeyer was born April 29, 1932 at McLaughlin, South Dakota, the son of Friedrich and Katharine (Walz) Stugelmeyer. After graduating from high school he worked for the North Dakota State Highway Department until entering the United States Army. He served from November 18, 1952 until November 17, 1954. During that time he was united in marriage to Vivian Larson, Valley City, on January 25, 1953 at Camp Gordon, Georgia. Upon returning to Valley City, he worked at Webster’s Plumbing and Heating. Stugie then began working for the Valley City Public Works Department, mainly in the sanitation department, on January 1, 1970 and continued there until his retirement in May of 1994. Vivian and Stugie operated roller skating for 21 years around the SE North Dakota area. He also enjoyed hunting and fishing. He died Sunday, September 30, at Mercy Hospital under the care of his family and Hospice of the Red River Valley. He was a member of Grace Free Lutheran Church and a former member of the Valley City Troubadours. Stugie is survived by his wife of 65 years, Vivian; two sons, Randy (Sandra) Stugelmeyer, Lake Chapala, Mexico and Danny (Kim) Stugelmeyer, Valley City; four grandchildren, Brianna (Nathan) Larison, Devin Stugelmeyer, Corrina Weninger and Seth Stugelmeyer; four great grandchildren; and several nephews and nieces. He was preceded in death by his parents, seven brothers and one sister. The funeral service will be at 2 pm Friday, October 5, 2018 at Grace Free Lutheran Church, Valley City. Visitation will be one hour before the service at the church. Burial will be in Memory Gardens, rural Valley City.

The family of Roland "Stugie" Stugelmeyer created this Life Tributes page to make it easy to share your memories.

Send flowers to the Stugelmeyer family.