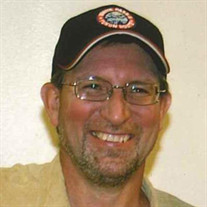 Service will be live streamed at https://vimeo.com/event/1507474 The funeral services for Roger W. Koebernick, 55, of Casa Grande, AZ, and formerly of Fargo, ND, will be Saturday, November 13, 2021 at 2:00 p.m. at Faith Lutheran Church in Valley City, ND. Roger passed away November 3, 2021 of COVID pneumonia. Roger was born in Valley City, ND, to William H. and Betty Lou (Laidley) Koebernick on August 21, 1966, and was raised on the family farm at Rogers, ND. He graduated from North Central of Barnes in 1985, and then went to college at Moorhead Vo-tech in 1986 for welding. After graduation he began employment at S-M Enterprises in Moorhead, MN. He worked for them 34 years. Roger was employed by Schuff Steel in Eloy, AZ from February 2021 until the time of his death. Roger married the love of his life Mary Haak September 19, 1997. They made their home in Fargo and spent the last 25 years together. They moved to Arizona in August 2020 so they could ride their Harley year around. They rode thousands of miles and have rode in all 50 states.He was a very hard worker and was very talented and could build anything needed out of steel. Roger enjoyed collecting John Deere and Harley-Davidson memorabilia, and could always count on him to be the photographer, as he loved to take pictures. Grateful for having shared Rogers life are his wife, Mary, Casa Grande, AZ; two step-sons, Jason (Martina) Storm, Aberdeen, SD and Joshua (Laney) Haak, Sioux Falls, SD; one step-granddaughter, Arawyn Jean Storm, Aberdeen, SD; two sisters, Sheryl (Darryl) Smith, Rogers, ND and Connie (Mike) Schrader, Langdon, ND; one sister-in-law, Diane (Mike) Storm, North Platte, NE; four nephews, three nieces, and two great nephews. He was preceded in death by his parents, William and Betty Koebernick, maternal grandparents, Roy and Sophia Laidley and paternal grandparents Emil and Emma Koebernick and father-in-law, Willie Doerr. The family requests no flowers. Funeral arrangements have been entrusted to the care of Oliver-Nathan Funeral Chapel, Valley City, North Dakota. An online guestbook is available at olivernathanchapel.com

Service will be live streamed at https://vimeo.com/event/1507474 The funeral services for Roger W. Koebernick, 55, of Casa Grande, AZ, and formerly of Fargo, ND, will be Saturday, November 13, 2021 at 2:00 p.m. at Faith Lutheran Church in... View Obituary & Service Information

The family of Roger W. Koebernick created this Life Tributes page to make it easy to share your memories.

Service will be live streamed at https://vimeo.com/event/1507474

Send flowers to the Koebernick family.