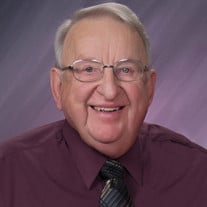 Roger Semke Bischoff, 81, a true family man and an avid St. Louis Cardinal Baseball fan, died Tuesday evening, August 16, 2016 at Essentia Health, Fargo, ND, with his family by his side. Roger Semke Bischoff was born May 22, 1935 in Jamestown, ND. He was the son of Clarence and Minna (Semke) Bischoff and was baptized and confirmed at Zion Lutheran Church, Courtenay, ND. Roger grew up on the family farm near Courtenay and attended rural Durham School #3. He graduated from Courtenay High School in 1953 and graduated from Jamestown College in 1957 with a bachelor’s degree in business and went on to receive his Master’s degree at NDSU. Roger served in the United States Army from October 7, 1958 to September 2, 1960 in Korea. After returning he farmed until mid-2000. He was united in marriage to Marlene Richter on June 10, 1961 in Bismarck, ND. They made their home in Chaffee and Gwinner, ND, where he taught school and in 1967 they moved to Valley City and he was an administrator at North Central School and later Tower City (ND) School. Roger owned several businesses before becoming the owner of Allard Trophy where he enjoyed working until the time of his death. He was a member of Trinity Lutheran Church where he had also served on the church council. He was a life member of the American Legion and VFW, and an Eagles and Elks member. Roger served as a Valley City commissioner from 1978-1986 and was currently a director of the Garrison Diversion Conservancy District which he had been elected to since 2008. He also served on the Landowners Association of North Dakota board and was past president. Besides baseball, Roger enjoyed his grandkids, playing a game of pinochle, traveling, hunting and fishing. Roger is survived by his wife, Marlene; his children and grandchildren, Michele (Bill) Trader, Grand Forks, ND and their family, Jennifer and Matthew; Gregory Bischoff, Valley City; Valerie (Doug) Giles, Abilene, Texas and their family, Benjamin and Aaron; a brother, Gordon (Gail) Bischoff, Jamestown; a brother-in-law, Dick Wilkens, Bismarck, ND; and a sister-in-law, Phyllis Richter, Valley City. He was preceded in death by his parents, a sister-in-law, Anita Wilkens, and a brother-in-law, Allen Richter. The funeral service will be 10 am Saturday, August 20 at Trinity Lutheran Church, Valley City. Burial will be in the Courtenay Cemetery. Visitation will be 5-7 pm Friday at the Oliver-Nathan Funeral Chapel, Valley City, with a prayer service in the chapel at 7 pm. Visitation will continue one hour before the service in the church. Funeral arrangements have been entrusted to the care of the Oliver-Nathan Funeral Chapel. An online guestbook is available at www.oliver-nathanchapel.com

The family of Roger Semke Bischoff created this Life Tributes page to make it easy to share your memories.

Send flowers to the Bischoff family.