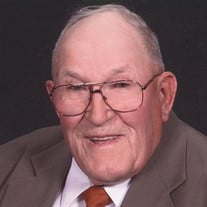 Robert “Bob” Wittenberg, Jr., 95, Valley City, ND passed away Wednesday, December 23, 2020 in Sheyenne Care Center, Valley City. Visitation will be from 12:00 pm until 2:00 pm on Wednesday, December 30, 2020 at Oliver-Nathan Funeral Chapel, Valley City. A private family funeral service will be held. Bob’s family invites you to view the live stream funeral service at 2:00 pm, Wednesday, December 30, 2020 at: https://vimeo.com/494663037. Burial will be held in Hillside Cemetery, Valley City. Robert Arno Wittenberg Jr. was born on February 14, 1925 to Robert Sr. and Anna (Schmidt) Wittenberg of Noltimier Township. Bob was confirmed at Trinity Lutheran Church in Valley City where he was a lifelong member. He grew up on the family farm, attending Noltimier School all twelve years and played on the Noltimier basketball team. Bob then attended one semester of college in Valley City before he had to return to the family farm. He served on the Noltimier Township board for many years as well as Hillside Cemetery Board and Hi-Line Elevator Board. Bob married Jean Bowder on December 4, 1954. They made their home on the Wittenberg farm homestead until moving to Valley City in 1993. Bob was the fourth generation to farm on his family farm. He was a hardworking man. To say he loved to farm was an understatement. Farming and everything that went with it was his hobby. Bob always said he never wanted to retire and the first 100 years are the hardest. He put on many, many miles on his little white pick-up. Bob and his brother Ralph drove all over the state checking crops. He also loved to make wooden step stools. Bob had the gift of being able to visit with anyone and sharing many, many stories. Bob is survived by his daughters, Rochelle (Les) Hansen, Litchville, ND, Renee (Larry) Ott, Newton, KS; son, Shawn (Kim) Wittenberg, Valley City; grandchildren, Derrick (Ana) Olson, Daniela Olson, Ashley (Michael) Rufsvold, Nicole (Robert) Latt, Heather (Jeff) Vogel, Seth (Kristen) Ott, Ethan Ott, Alex (Megan) Wittenberg and Miranda Wittenberg. Bob is also survived by his nine great grandchildren. Bob is preceded in death by his parents; siblings, Ralph, Albert, Carl, Lillian and Esther; daughter, Shela Olson Wittenberg and granddaughter, Michele Olson. In lieu of flowers memorials may be given to Trinity Lutheran Church or Hillside Cemetery, Valley City. Funeral arrangements have been entrusted to the care of the Oliver-Nathan Funeral Chapel, Valley City. An online guestbook is available at www.oliver-nathanchapel.com

The family of Robert Wittenberg created this Life Tributes page to make it easy to share your memories.

Send flowers to the Wittenberg family.