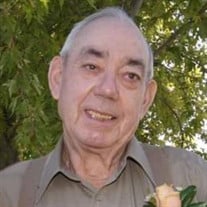 Robert “Bob” Pierce, 82, Buffalo, North Dakota passed away Friday, October 30, 2020 in CHI Mercy Hospital, Valley City, North Dakota. Visitation will be held 5:00 to 7:00 pm with a prayer service at 7 pm on Tuesday, November 3 at Oliver-Nathan Funeral Chapel, Valley City. A private family service will be held in First Presbyterian Church, Tower City, North Dakota. Burial will be in the Buffalo Cemetery. Robert Dale Pierce was born May 22, 1938 in Carrington, North Dakota to Henry and Ruth (Ruetter) Pierce. He was raised on a farm and attended school in Juanita, North Dakota. At the age of 19, he joined the US Army and was stationed in Germany for two years where he enjoyed the country side. He later returned to North Dakota where he managed a filling station. He then moved to Buffalo where he met the love of his life, Jane Schneekloth. They managed the family farm and together they celebrated 58 years of marriage on October 19, 2020. Bob continued to work on the farm until his retirement. After his retirement he enjoyed helping his son, Todd, on the farm. Bob enjoyed raising and working with his livestock, especially Simmental cows and draft horses. He entered a team of horses in the Valley City Winter Show horse pull a few years and worked there too. Family time, was Bob’s first love, whether it be fishing, playing pool, card games or attending his children and grandchildren’s sporting events. Deer hunting with his sons and grandsons was a Fall highlight. Bob was a member of First Presbyterian Church, Tower City and served as an elder of the church. Bob is survived by his wife, Jane, Buffalo; children, Jeff (Rebecca Dahl), Fargo, Sheree (Ben) Fletcher, Moorhead, MN, Tim (Julie) Pierce, Horace, ND, and Todd (Darla) Pierce, Buffalo; ten grandchildren, Ryan (Janeice) Pierce, Shauntae Pierce, Shayla (Adam) Hurt, Reanna (Cory) Schaffer, Seth Fletcher, Kaylee (Dylan) Carlisle, Brandon Pierce, Michael Pierce, Matthew Pierce, and Alyssa Pierce; five great-grandchildren; his brothers, Laurence Pierce, Fargo and Alvin Pierce, Fargo. Bob is preceded in death by his parents and siblings, Rose, Etta, Darlene, Gayle, Mary Ellen, and Clarence. Bob’s family would like to express their gratitude to Bob’s nurse, Kayla, from Sanford Home Health of Lisbon for the care and compassion she provided to him and his family. Funeral arrangements have been entrusted to the Oliver-Nathan Funeral Chapel, Valley City. An online guestbook is available to sign at www.oliver-nathanchapel.com

The family of Robert "Bob" Pierce created this Life Tributes page to make it easy to share your memories.

Send flowers to the Pierce family.