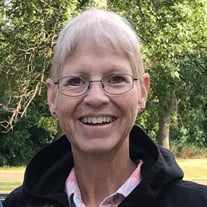 Renee Emma Aarseth, 64, of Fingal, ND passed away after a courageous fight with pancreatic cancer. She was surrounded by loved ones in CHI Mercy Health, Valley City, under the care of CHI Hospice on January 19, 2020 when she went to her heavenly home. Renee was born January 24, 1955 to Randolph and Edna (Koebernick) Maasjo in Valley City. She attended Norma School, a one room schoolhouse through second grade. She then attended school in Fingal, ND, where she graduated in 1973. Renee attended NDSCS for nursing and graduated as an LPN in 1975. While working in Fargo at St. Lukes Renee met the love of her life, Allen Aarseth, whom she married in 1978. They moved to the Fingal area in 1979. She worked at Maryvale and then Sheyenne Care Center until she retired. Renee was an avid member of Messiah Lutheran Church, WELCA and loved to maintain Emmanuel Cemetery, as well as any other lawn keeping. She was also a member of the Legion Auxiliary in Fingal and the Fingal School Reunion Committee. Renee enjoyed riding four-wheeler with the grandkids and in the winter pulling them on the sled behind the pickup. She loved to read, garden, spend time with her grandkids, play darts, and roll lefsa, “dontcha know!” Renee is survived by her husband Allen of 41 years; son Jason (Peggy) Aarseth and their two children Dylan and Payton Aarseth; son-in-law, Jason Walker and his daughters, Abby and Brianna Walker; daughters, Tammy Anderson; Amy Perdue and her children Samantha Eggermont, Teanna Perdue, and Jacob (Shelbie Kelso) Perdue and their children Jailee and Easton Perdue; a brother Eldon (Shari) Maasjo; a sister-in-law Sue (Steven) Hanson; and brothers-in-law, Ray Aarseth and Loren Aarseth. Renee is preceded in death by her daughter, Sara Walker; her parents; her in-laws Carol and Archie Aarseth; a sister-in-law Velaun Aarseth, and brothers-in-law, Duane Aarseth and Donnie Aarseth. Memorials may be directed to Messiah Lutheran Church WELCA or Emmanuel Cemetery, Fingal, in Renee’s honor. Visitation will be Saturday, January 25, from 5-7 pm followed by a prayer service at 7 pm in Oliver-Nathan Funeral Chapel, Valley City. The funeral service will be Sunday, January 26 at 2 pm in Messiah Lutheran Church, Fingal, with the visitation one hour prior to the funeral service. Funeral arrangements have been entrusted to the care of Oliver-Nathan Funeral Chapel, Valley City. An online guestbook is available at www.olivernathanchapel.com.

Renee Emma Aarseth, 64, of Fingal, ND passed away after a courageous fight with pancreatic cancer. She was surrounded by loved ones in CHI Mercy Health, Valley City, under the care of CHI Hospice on January 19, 2020 when she went to her heavenly... View Obituary & Service Information

The family of Renee Emma Aarseth created this Life Tributes page to make it easy to share your memories.

Renee Emma Aarseth, 64, of Fingal, ND passed away after a courageous...

Send flowers to the Aarseth family.