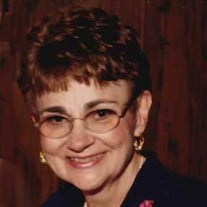 Phyllis Fae Breitbach, 81, Valley City, North Dakota, died peacefully on Saturday, July 25, 2015 at the Sheyenne Care Center, Valley City. Phyllis Fae Frahm was born June 25, 1934 in Valley City, the daughter of Ervin and Gladys (Hostetler) Frahm. She attended rural school near Wimbledon, North Dakota and later attended and graduated from Wimbledon high school in 1952. She went on to attend the Interstate Business College in Fargo, North Dakota and then began working for several doctors in the Black Building, Fargo. Phyllis was united in marriage to Leslie Breitbach on August 20, 1960 in Wimbledon. They made their home in St. Paul, Minnesota until moving to Fargo in 1965. In 1967, they moved to Valley City. She was a member of Epworth United Methodist Church. She had become a resident of the Sheyenne Care Center in April of 2007. She is survived by her husband, Leslie; her son, Mark Breitbach, Valley City; her daughter, Jane Ann (Jeff) Anderson, Fargo; and her grandchildren, Matthew (Kris), David, Emily and Brandon. Phyllis was preceded in death by her parents, one brother, Gene Frahm and one sister, Karen Ludwig. Blessed be her memory. The funeral service will be 11 am Wednesday, July 29, at Epworth United Methodist Church, Valley City, with burial in Memory Gardens, Valley City. Visitation will be 5 – 7 pm Tuesday at the Oliver-Nathan Funeral Chapel, with a prayer service at 7 pm. Visitation will continue one hour before the service at the church. Funeral arrangements have been entrusted to the care of the Oliver-Nathan Funeral Chapel, Valley City. An online guestbook for Phyllis is available at www.oliver-nathanchapel.com

The family of Phyllis Fae Breitbach created this Life Tributes page to make it easy to share your memories.

Send flowers to the Breitbach family.