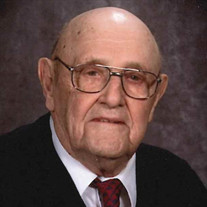 Perry B Grotberg, 93, Valley City, North Dakota, died at Sheyenne Care Center on Friday, October 16th. He was born December 30, 1921 to Bernard and Sophie (Weir) Grotberg in Blue Earth County, MN. Perry graduated from VCHS in 1939. After graduation, Perry moved to Boulder City, NV and began working on the construction of Boulder Dam (Hoover Dam). In 1942, Perry received a job invitation from Uncle Sam and reported for duty. He fought in Belgium, Luxemburg, Netherlands, Germany and France. After the war, Perry married Margaret Thiel at Trinity Lutheran Church in Valley City and returned to work on Boulder Dam. In 1947, Perry and Margaret moved back to Valley City where Perry took over farming some family land and began his wiring career. He stored tools and inventory in the back of his car and in the garage, then in 1948, Perry obtained his wiring license and began Grotberg Electric. Perry and Margaret, along with several other parents, formed a local and the state chapter of the ARC. These parents worked with legislators to pass laws to include the education of the handicapped in the public schools in ND. As a result, a Special Education classroom at Lincoln School was begun in VC. They were also instrumental in establishing a day facility for the developmentally disabled and helped to secure the basement of the City Auditorium as the first home for the Open Door Center. When Grafton State Hospital and San Haven were depopulated, the local ARC chapter promoted the building of group homes for the developmentally disabled in Valley City Perry served 4 years as a ND State Senator representing District 24 then 1 term as Secretary of the Senate. During retirement, Margaret and Perry enjoyed traveling and were able to return to Europe to see the countries in which Perry fought during the war. He retired from farming in 1969 and sold Grotberg Electric in 1984. He was an active member of Trinity Lutheran Church and VC Chamber of Commerce. Perry is survived by daughters, Amy (Bruce) Anderson and Carol Grotberg both of Valley City and Donna (Don) Gutierrez of Chagrin Falls, OH; grandchildren, Tracey (Chad) Zaun, Jason and Aaron Anderson all of Valley City and Alyssa and Grace Gutierrez of Ohio, and 6 great grandchildren; brother Maurice (Myrna) Grotberg of Memphis TN, and sisters Mary (John) Heath of Valley City and Jean (Ross) Huffman of Colorado Springs, CO. Perry was preceded in death by his parents; his wife, Margaret; brothers Bruce and John, and his sisters Betty (Leonard) Uloth and Shirley (Charles) Licha. The funeral service for Perry will be 11 am Friday, October 23, 2015 at Trinity Lutheran Church, Valley City. Burial will be in Memory Gardens, Valley City. Visitation will be 4-6 pm Thursday at the Oliver-Nathan Funeral Chapel, Valley City. An online guestbook for Perry is available at www.oliver-nathanchapel.com Amy Anderson's address is: 426 4th Ave. SW, Valley City, ND 58072

The family of Perry Bernard Grotberg created this Life Tributes page to make it easy to share your memories.

Send flowers to the Grotberg family.