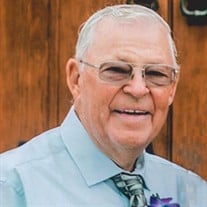 Paul D. Fisher, 81, of Kathryn, ND passed away Monday, March 22, 2021 in Fargo, ND surrounded by his family under the care of Sanford Hospice. Visitation will be held from 5:00 – 7:00 pm Friday, March 26, 2021 with a prayer service beginning at 7:00 pm at Our Savior’s Lutheran Church, Valley City, ND. The funeral service will be 10:30 am Saturday, March 27, 2021 at St. Paul’s Lutheran Church, Kathryn. Visitation will be one hour before the service at the church. Burial will be later in the spring in St. Paul’s Cemetery, Kathryn. Paul Dennis Fisher was born on a farm near Nome, ND August 26, 1939, one of ten children, to Ole and Cora (Hanson) Fisher. He attended grade school in Nome and was confirmed from Our Savior’s Lutheran Church in Valley City. In 1959, Paul entered the US Army serving in Germany. He was discharged in 1963 and made his home in Snohomish, WA. There he was a volunteer firefighter, EMT and worked for Boeing. Paul began long range commercial trucking in the 1970s. In 1975, Paul was married to Marlyn “Marlie” Stevens. They moved to Jamestown, ND where he worked for Western Gear. Paul returned to trucking in 1982 when they moved to Fargo. In 2000, Paul “retired” and moved to Kathryn. He served as a mayor, fire chief, caretaker of the town, sexton of St. Paul’s Cemetery and was instrumental in development and revitalization of Kathryn’s infrastructure. Paul was a member of St. Paul’s Lutheran Church, Kathryn, Valley City Eagles Club and The American Legion, Peterson Swenson Post 83, Nome. Paul is survived by his wife, Marlie; children, Cory Fisher, Sparks, NV, Heidi Fisher, Joshua Tree, CA, Stephanie Hesse, Fargo and Mark Hesse, St. Cloud, MN; granddaughter Courtney (Adrian) Davis; a great grandson, Coen; a brother Lyle (Rose) Fisher, Boise, ID; a sister Barbara Boblett, Snohomish, WA and several nieces and nephews. Paul is preceded in death by his siblings, Bud, Pearl, Florence, Harold, Glenn, Gary and Carolyn and by his daughter Shaundel Hesse. Funeral arrangements have been entrusted to the care of the Oliver-Nathan Funeral Chapel, Valley City. An online guestbook is available at www.oliver-nathanchapel.com

The family of Paul Fisher created this Life Tributes page to make it easy to share your memories.

Send flowers to the Fisher family.