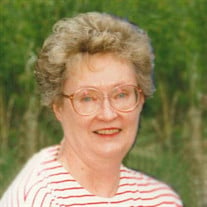 Patricia Ann Mosal (West) 90, passed away on December 29, 2020 in Sun City West, Arizona. She was the daughter of Sigurd and Nellie (Grant) West, Pat was born onDecember 28, 1930 in Minneapolis, Minnesota. She grew up in Glen Lake and Minneapolis graduating from North High. While attending the University of Minnesota she met a young man who had returned from serving in the Army, her future husband John Mosal. She graduated from the U of M earning a degree in teaching. Pat and John (aka Jack) were married on October 10, 1952 and settled in Minneapolis. Soon they were headed to Huron South Dakota where they were partners in a Coast to Coast hardware store. It was in Huron where they welcomed two sons, Jeff and Jonathan. They returned to Minneapolis where John continued to work for the Coast to Coast company and Pat substitute taught and raised the boys. In 1966, the family moved to Valley City North Dakota. Once the boys were both in school, Pat started doing more and more substitute teaching. She also taught Spanish at Valley City High School for a time before she finally achieved her goal of being a full-time elementary teacher. Mrs. Mosal taught mostly 3rd and 4th grades and did so at the Lincoln and Jefferson Elementary Schools. She was active in Delta Kappa Gamma and the NDEA. She truly enjoyed her students and relished hearing from them later in life. In those years of raising her family they enjoyed camping and fishing with the boys, traveling across the United States and a multitude of hobbies and crafts. Pat was an outstanding cook and baker. Jack and Pat enjoyed square-dancing and traveled to many of the local outings. A penchant for travel took them to Arizona many times and Sun City West ultimately became their winter home. RVing that migration for many years. Patricia is survived by her husband John of Valley City, sons Jeff (Brenda) Mosal of Castle Rock Colorado and Jonathan (Fonda) Mosal of St Johns, Florida; grandchildren Amber, Sabine, Candice, Zia and Grant. She was preceded in death by her parents. The memorial service for Pat will be 10:30 am Monday, July 5, 2021, at Oliver-Nathan Funeral Chapel. Inurnment will be at Fort Snelling National Cemetery, Minneapolis, Minnesota.

Patricia Ann Mosal (West) 90, passed away on December 29, 2020 in Sun City West, Arizona. She was the daughter of Sigurd and Nellie (Grant) West, Pat was born onDecember 28, 1930 in Minneapolis, Minnesota. She grew up in Glen Lake and Minneapolis... View Obituary & Service Information

The family of Patricia Ann "West" Mosal created this Life Tributes page to make it easy to share your memories.