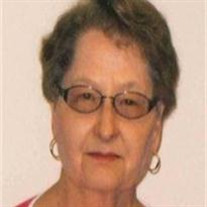 Pamalee E. Holm, age 75, passed away on December 21, 2011, at her home in Valley City, ND, after a courageous battle with pancreatic cancer. Pam was born on September 30, 1936, in Valley City to Oliver and Elvera (Lokken) Peterson. She was baptized and confirmed at First Lutheran Church. She graduated from Valley City High School in 1954 and attended Macalester College in Minneapolis and Valley City State University. She married Lee Holm on May 9, 1957. They lived in Milwaukee, WI while he attended mortuary school. They returned to Valley City and in 1965, along with her brother and his wife, purchased Oliver’s Chapel from her parents. She remained an active part of the business until her retirement in 1996. Pam was an active member of the United Church of Christ, serving as president of the Women’s Fellowship, co-director of the annual Chuck Wagon Dinner, special events board, wedding coordinator, and as a deacon, trustee, and Sunday School superintendent and teacher over the years. She co-chaired every All 50’s Reunion held in Valley City, was a member of Beta Sigma Phi Sorority for over 40 years, Eastern Star, and the Eagles and Legion Auxiliary. She loved to play bridge and was a member of one club for over 50 years and played in several others over the years. She also enjoyed attending as many activities and sporting events as she could for her children and grandchildren. Pam is survived by her daughter Beth (Steve) Undem, Leal, ND; son, Jay (Darcy) Holm; and daughters Suzie (Todd) Kapaun and Leigh Ann (Rich) Berg all of Valley City. She is also survived by ten grandchildren Jon (Brenda) Undem, Breckenridge, MN; Adam Undem, Bismarck; Daniel Undem Valley City; Joshua Holm, Valley City; Brianna Holm, Fargo; and Rebecca Holm, Valley City; Amy and Dillon Kapaun, Valley City; Logan and Austin Berg, Valley City; one step-grandchild, Sammy Johnson, Valley City; and two great-grandchildren, Victoria and Connor Undem, Breckenridge. Pam’s brother and sister-in-law, Ty and Carol Peterson of Valley City and several nieces and nephews also survive. She is preceded in death by Lee Holm, her parents, a brother, Tom Peterson, and two nephews.

Pamalee E. Holm, age 75, passed away on December 21, 2011, at her home in Valley City, ND, after a courageous battle with pancreatic cancer. Pam was born on September 30, 1936, in Valley City to Oliver and Elvera (Lokken) Peterson. She was... View Obituary & Service Information

The family of Pamalee Holm created this Life Tributes page to make it easy to share your memories.

Send flowers to the Holm family.