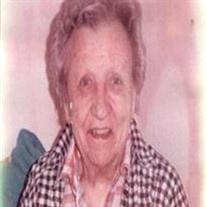 Opal Arlene Bowman was born on May 8, 1917 in Pilot Mound, IA, the daughter of Charles Edgar and Myrtle Edna (Hunt) Bowman. She attended Pilot Mound Consolidated School. On November 13, 1933, she married Harold Elijah Kelley in Boone, IA. She worked as a waitress at the Eppley Airfield, Omaha, Nebraska and later worked at the Hayden House in Omaha. In 1975, she moved to ND. On September 16, 1977, she married Ernest Arnold Larson. She and Ernest made their home on his farm and they farmed there until retiring in the fall of 1978. They moved to Litchville, ND in November 1995. He died on April 4, 1997. She is survived by 4 grandchildren and 2 great grandchildren, a sister, Rosie Thompson of West Covina, CA; step-daughter, Mercedith (Francis) Trzpuc of Marion; sisters-in-law and brother-in-law, Ida Reynolds, Reardon, WA; Lydia Bowman, Valley City and Dorothy and Dan Larson, Litchville; 3 nieces and 3 nephews. She was preceded in death by her parents; husband; an infant daughter, Dixie Lou Kelley; a son, Gary E. Kelley; sister, Dorothy Sbiye; brothers, Roland, Roy, and Byron

The family of Opal Larson created this Life Tributes page to make it easy to share your memories.