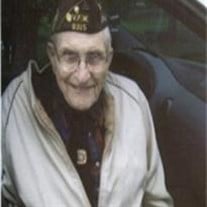 Ole Wesley Jerome Horsager was born May 22, 1920 at Litchville, North Dakota, the son of John C. and Olise (Belling) Horsager. He was baptized and confirmed at North LaMoure Lutheran Church. He attended North LaMoure School. Wesley farmed with his father before entering the United States Army on February 21, 1945. He was discharged with a rank of Private First Class on October 1, 1946. Wesley was united in marriage to Alice Otelia Sorenson on August 8, 1945 at Trinity Lutheran Church, Moorhead, Minnesota. They made their home and farmed in Black Loam Township, LaMoure County,– near Litchville until 1953. They then moved to Oak Hill Township, Barnes County, - three miles SW of Kathryn. They retired in 1978. He had been a member of Nordheim Lutheran Church until its closing and then became a member of St. Paul’s Lutheran Church, Kathryn. Wesley was a member of the American Legion and the VFW. He is survived by his wife of 63 years, Alice; a son, Wayne (Coni), Valley City; two daughters, Diane (Tom) Bohlman, Blaine, Minnesota; Sandra Berg, Cambridge, Minnesota; seven grandchildren, and eleven great grandchildren and a brother, Kermit, Lisbon, North Dakota. Wesley was preceded in death by his parents, son-in-law Leonard Berg and a cousin Pearl Roedel.

The family of O. Wesley Horsager created this Life Tributes page to make it easy to share your memories.

Send flowers to the Horsager family.