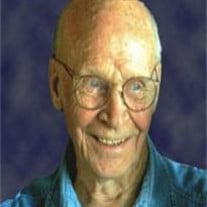 Norman Johnson, age 85, passed away in the early hours of December 4, 2010, surrounded by his family at Sanford Health in Fargo ND. Norman was born July 5, 1925 to Joseph and Edna (Fisher) Johnson in Nome ND. He attended Nome Public School and upon completion of his schooling was drafted into the US Army, serving from 1943 to 1945 with Troop B 23rd Calvary Reconnaissance Squadron landing on Normandy Beach, where he was wounded and spent two months in a military hospital in England. Upon returning to active duty, he was wounded two more times during his tour of duty. Norm was awarded several medals for his honorable service during World War II, including the Purple Heart and the Silver Star. Upon discharge from the Army, Norm returned to Nome, ND where he married the love of his life, Jeanette Anderson. They moved to Valley City where Norm worked in furniture sales and management. He enjoyed working with the public and made many friends with his customers over the years. He worked for Anderson Furniture, Coghlan Furniture and Empire Home Furnishings, retiring in 1987. He later returned to work part-time because he missed his interaction with the public and the many friends he had grown to enjoy. Norm and Jean raised five children in Valley City. They enjoyed many family activities including, camping, water sports, snow mobiling and large family get-togethers which led them to purchase a lake cabin in Minnesota so that the family could spend weekends in the summer creating many wonderful memories. Norm was a humble, honorable and generous man. He never hesitated to make sacrifices for his family. He had a wonderful sense of humor and a twinkle in his eye. He will always be remembered in our hearts through the wonderful, caring and humorous memories shared with his family. He truly enriched our lives and will be dearly missed. He is survived by his wife, Jean, Valley City; three sons, Steve (Kim) Johnson and Stan (Pam) Johnson, both of Fargo; Scott (Deb) Johnson, Horace, North Dakota; two daughters, Norma Marsh, Seattle, Washington; Sue (Rod) Schauer, Valley City; 10 grandchildren and eight great grandchildren; one brother, Sherman Johnson, Coon Rapids, Minnesota and one sister, Sandra Kemmer, Mayville, North Dakota. Norm was preceded in death by his parents and two infant sons.

Norman Johnson, age 85, passed away in the early hours of December 4, 2010, surrounded by his family at Sanford Health in Fargo ND. Norman was born July 5, 1925 to Joseph and Edna (Fisher) Johnson in Nome ND. He attended Nome Public School... View Obituary & Service Information

The family of Norman Johnson created this Life Tributes page to make it easy to share your memories.

Norman Johnson, age 85, passed away in the early hours of December...